The elite funds run by legendary investors such as David Tepper and Dan Loeb make hundreds of millions of dollars for themselves and their investors by spending enormous resources doing research on small cap stocks that big investment banks don’t follow. Because of their pay structures, they have strong incentives to do the research necessary to beat the market. That’s why we pay close attention to what they think in small cap stocks. In this article, we take a closer look at Floor & Decor Holdings, Inc. (NYSE:FND) from the perspective of those elite funds.

Floor & Decor Holdings, Inc. (NYSE:FND) was in 19 hedge funds’ portfolios at the end of December. FND shareholders have witnessed a decrease in support from the world’s most elite money managers lately. There were 25 hedge funds in our database with FND holdings at the end of the previous quarter. Our calculations also showed that fnd isn’t among the 30 most popular stocks among hedge funds.

What have hedge funds been doing with Floor & Decor Holdings, Inc. (NYSE:FND)? 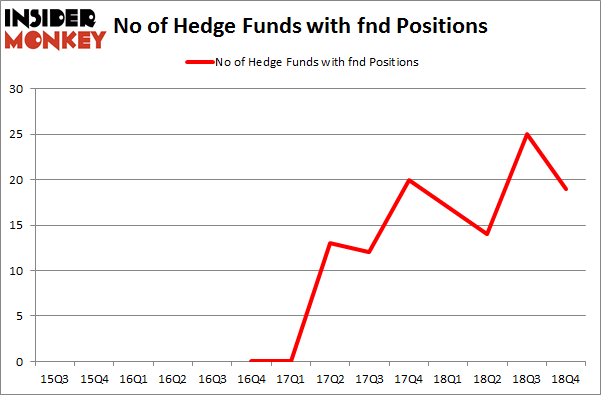 The largest stake in Floor & Decor Holdings, Inc. (NYSE:FND) was held by Joho Capital, which reported holding $144.6 million worth of stock at the end of September. It was followed by Broad Bay Capital with a $12.1 million position. Other investors bullish on the company included Citadel Investment Group, Renaissance Technologies, and Marshall Wace LLP.

Seeing as Floor & Decor Holdings, Inc. (NYSE:FND) has faced falling interest from the entirety of the hedge funds we track, it’s easy to see that there is a sect of hedgies who sold off their full holdings in the third quarter. Interestingly, Jeffrey Talpins’s Element Capital Management said goodbye to the biggest investment of all the hedgies monitored by Insider Monkey, comprising an estimated $30 million in stock, and Benjamin A. Smith’s Laurion Capital Management was right behind this move, as the fund said goodbye to about $18.9 million worth. These bearish behaviors are interesting, as total hedge fund interest fell by 6 funds in the third quarter.

As you can see these stocks had an average of 16 hedge funds with bullish positions and the average amount invested in these stocks was $357 million. That figure was $213 million in FND’s case. Univar Inc (NYSE:UNVR) is the most popular stock in this table. On the other hand Altus Midstream Company (NASDAQ:ALTM) is the least popular one with only 5 bullish hedge fund positions. Floor & Decor Holdings, Inc. (NYSE:FND) is not the most popular stock in this group but hedge fund interest is still above average. Our calculations showed that top 15 most popular stocks) among hedge funds returned 24.2% through April 22nd and outperformed the S&P 500 ETF (SPY) by more than 7 percentage points. Hedge funds were also right about betting on FND as the stock returned 75.1% and outperformed the market by an even larger margin. Hedge funds were rewarded for their relative bullishness.