Did Hedge Funds Drop The Ball On FGL Holdings (FG) ?

FGL Holdings (NYSE:FG) was in 29 hedge funds’ portfolios at the end of December. FG has experienced an increase in support from the world’s most elite money managers of late. There were 28 hedge funds in our database with FG holdings at the end of the previous quarter. Our calculations also showed that FG isn’t among the 30 most popular stocks among hedge funds.

At Q4’s end, a total of 29 of the hedge funds tracked by Insider Monkey were bullish on this stock, a change of 4% from the previous quarter. On the other hand, there were a total of 30 hedge funds with a bullish position in FG a year ago. With hedge funds’ positions undergoing their usual ebb and flow, there exists a few key hedge fund managers who were boosting their stakes substantially (or already accumulated large positions). 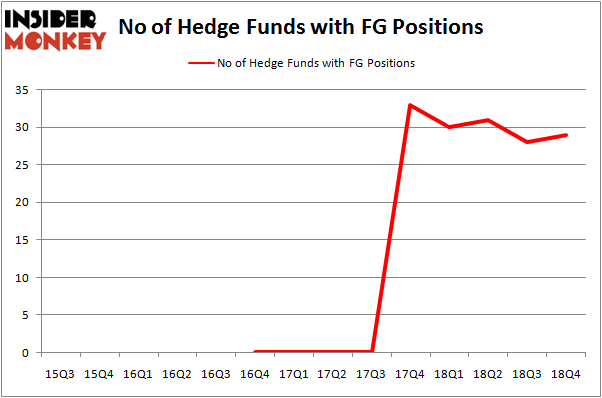 The largest stake in FGL Holdings (NYSE:FG) was held by Kingstown Capital Management, which reported holding $44.5 million worth of stock at the end of December. It was followed by Mason Capital Management with a $39.1 million position. Other investors bullish on the company included Canyon Capital Advisors, Ulysses Management, and StackLine Partners.

With a general bullishness amongst the heavyweights, key money managers have been driving this bullishness. Ulysses Management, managed by Joshua Nash, assembled the biggest position in FGL Holdings (NYSE:FG). Ulysses Management had $16.5 million invested in the company at the end of the quarter. Brian Gootzeit and Andrew Frank’s StackLine Partners also made a $15.7 million investment in the stock during the quarter. The other funds with brand new FG positions are George McCabe’s Portolan Capital Management, Farhad Nanji and Michael DeMichele’s MFN Partners, and Richard Rubin’s Hawkeye Capital.

As you can see these stocks had an average of 17 hedge funds with bullish positions and the average amount invested in these stocks was $175 million. That figure was $208 million in FG’s case. Rapid7 Inc (NASDAQ:RPD) is the most popular stock in this table. On the other hand Chesapeake Lodging Trust (NYSE:CHSP) is the least popular one with only 12 bullish hedge fund positions. Compared to these stocks FGL Holdings (NYSE:FG) is more popular among hedge funds. Our calculations showed that top 15 most popular stocks) among hedge funds returned 24.2% through April 22nd and outperformed the S&P 500 ETF (SPY) by more than 7 percentage points. Hedge funds were also right about betting on FG as the stock returned 27.8% and outperformed the market by an even larger margin. Hedge funds were clearly right about piling into this stock relative to other stocks with similar market capitalizations.