Did Hedge Funds Drop The Ball On Euronav NV (EURN)?

Is Euronav NV (NYSE:EURN) a marvelous stock to buy now? Prominent investors are reducing their bets on the stock. The number of bullish hedge fund bets decreased by 5 in recent months. Our calculations also showed that EURN isn’t among the 30 most popular stocks among hedge funds.

We’re going to take a glance at the key hedge fund action regarding Euronav NV (NYSE:EURN).

What have hedge funds been doing with Euronav NV (NYSE:EURN)?

At the end of the fourth quarter, a total of 11 of the hedge funds tracked by Insider Monkey held long positions in this stock, a change of -31% from one quarter earlier. On the other hand, there were a total of 7 hedge funds with a bullish position in EURN a year ago. With the smart money’s capital changing hands, there exists an “upper tier” of key hedge fund managers who were increasing their stakes considerably (or already accumulated large positions). 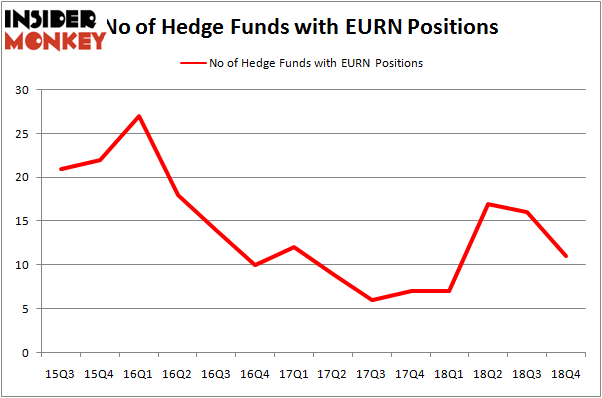 Among these funds, Oaktree Capital Management held the most valuable stake in Euronav NV (NYSE:EURN), which was worth $63.7 million at the end of the fourth quarter. On the second spot was Blue Mountain Capital which amassed $17.6 million worth of shares. Moreover, Carlson Capital, QVT Financial, and Huber Capital Management were also bullish on Euronav NV (NYSE:EURN), allocating a large percentage of their portfolios to this stock.

Since Euronav NV (NYSE:EURN) has experienced bearish sentiment from the entirety of the hedge funds we track, logic holds that there lies a certain “tier” of hedgies who were dropping their full holdings by the end of the third quarter. Interestingly, David Rosen’s Rubric Capital Management said goodbye to the biggest investment of the 700 funds watched by Insider Monkey, comprising about $3.3 million in stock. Arvind Sanger’s fund, GeoSphere Capital Management, also said goodbye to its stock, about $1 million worth. These transactions are intriguing to say the least, as aggregate hedge fund interest fell by 5 funds by the end of the third quarter.

Let’s go over hedge fund activity in other stocks – not necessarily in the same industry as Euronav NV (NYSE:EURN) but similarly valued. We will take a look at Heartland Financial USA Inc (NASDAQ:HTLF), NBT Bancorp Inc. (NASDAQ:NBTB), The Gabelli Dividend & Income Trust (NYSE:GDV), and Innospec Inc. (NASDAQ:IOSP). This group of stocks’ market caps are closest to EURN’s market cap.

As you can see these stocks had an average of 8 hedge funds with bullish positions and the average amount invested in these stocks was $20 million. That figure was $130 million in EURN’s case. Innospec Inc. (NASDAQ:IOSP) is the most popular stock in this table. On the other hand The Gabelli Dividend & Income Trust (NYSE:GDV) is the least popular one with only 2 bullish hedge fund positions. Euronav NV (NYSE:EURN) is not the most popular stock in this group but hedge fund interest is still above average. Our calculations showed that top 15 most popular stocks) among hedge funds returned 24.2% through April 22nd and outperformed the S&P 500 ETF (SPY) by more than 7 percentage points. Hedge funds were also right about betting on EURN as the stock returned 40.1% and outperformed the market by an even larger margin. Hedge funds were rewarded for their relative bullishness.