Legendary investors such as Jeffrey Talpins and Seth Klarman earn enormous amounts of money for themselves and their investors by doing in-depth research on small-cap stocks that big brokerage houses don’t publish. Small cap stocks -especially when they are screened well- can generate substantial outperformance versus a boring index fund. That’s why we analyze the activity of those elite funds in these small-cap stocks. In the following paragraphs, we analyze Essent Group Ltd (NYSE:ESNT) from the perspective of those elite funds.

Essent Group Ltd (NYSE:ESNT) investors should pay attention to a decrease in enthusiasm from smart money recently. ESNT was in 28 hedge funds’ portfolios at the end of the fourth quarter of 2018. There were 30 hedge funds in our database with ESNT holdings at the end of the previous quarter. Our calculations also showed that esnt isn’t among the 30 most popular stocks among hedge funds.

If you’d ask most traders, hedge funds are assumed to be worthless, outdated investment vehicles of yesteryear. While there are over 8000 funds with their doors open at the moment, Our experts choose to focus on the crème de la crème of this club, around 750 funds. Most estimates calculate that this group of people handle the lion’s share of the hedge fund industry’s total capital, and by keeping an eye on their unrivaled equity investments, Insider Monkey has spotted many investment strategies that have historically outrun the S&P 500 index. Insider Monkey’s flagship hedge fund strategy outpaced the S&P 500 index by nearly 5 percentage points a year since its inception in May 2014 through early November 2018. We were able to generate large returns even by identifying short candidates. Our portfolio of short stocks lost 27.5% since February 2017 (through March 12th) even though the market was up nearly 25% during the same period. We just shared a list of 6 short targets in our latest quarterly update and they are already down an average of 6% in less than a month.

How have hedgies been trading Essent Group Ltd (NYSE:ESNT)? 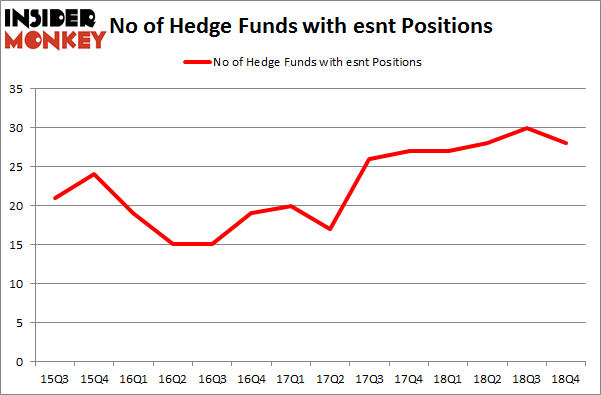 According to publicly available hedge fund and institutional investor holdings data compiled by Insider Monkey, Brian Ashford-Russell and Tim Woolley’s Polar Capital has the biggest position in Essent Group Ltd (NYSE:ESNT), worth close to $62.4 million, amounting to 0.7% of its total 13F portfolio. On Polar Capital’s heels is Noam Gottesman of GLG Partners, with a $61.2 million position; 0.3% of its 13F portfolio is allocated to the company. Some other professional money managers that hold long positions contain Jim Simons’s Renaissance Technologies, Ken Griffin’s Citadel Investment Group and Dmitry Balyasny’s Balyasny Asset Management.

Seeing as Essent Group Ltd (NYSE:ESNT) has witnessed declining sentiment from the aggregate hedge fund industry, we can see that there were a few fund managers that decided to sell off their full holdings by the end of the third quarter. It’s worth mentioning that Daniel Johnson’s Gillson Capital sold off the biggest investment of all the hedgies followed by Insider Monkey, valued at an estimated $12.2 million in stock, and Eric Edidin and Josh Lobel’s Archer Capital Management was right behind this move, as the fund dumped about $8 million worth. These bearish behaviors are interesting, as total hedge fund interest fell by 2 funds by the end of the third quarter.

As you can see these stocks had an average of 22.5 hedge funds with bullish positions and the average amount invested in these stocks was $189 million. That figure was $370 million in ESNT’s case. Air Lease Corp (NYSE:AL) is the most popular stock in this table. On the other hand Glacier Bancorp, Inc. (NASDAQ:GBCI) is the least popular one with only 10 bullish hedge fund positions. Essent Group Ltd (NYSE:ESNT) is not the most popular stock in this group but hedge fund interest is still above average. Our calculations showed that top 15 most popular stocks) among hedge funds returned 24.2% through April 22nd and outperformed the S&P 500 ETF (SPY) by more than 7 percentage points. Hedge funds were also right about betting on ESNT as the stock returned 33.2% and outperformed the market by an even larger margin. Hedge funds were rewarded for their relative bullishness.