Did Hedge Funds Drop The Ball On Endava plc (DAVA)?

During the fourth quarter the Russell 2000 ETF (IWM) lagged the larger S&P 500 ETF (SPY) by nearly 7 percentage points as investors worried over the possible ramifications of rising interest rates. The hedge funds and institutional investors we track typically invest more in smaller-cap stocks than an average investor (i.e. only 298 S&P 500 constituents were among the 500 most popular stocks among hedge funds), and we have seen data that shows those funds paring back their overall exposure. Those funds cutting positions in small-caps is one reason why volatility has increased. In the following paragraphs, we take a closer look at what hedge funds and prominent investors think of Endava plc (NYSE:DAVA) and see how the stock is affected by the recent hedge fund activity.

Is Endava plc (NYSE:DAVA) a splendid investment today? The smart money is taking a bearish view. The number of bullish hedge fund positions dropped by 2 recently. Our calculations also showed that DAVA isn’t among the 30 most popular stocks among hedge funds. DAVA was in 6 hedge funds’ portfolios at the end of the fourth quarter of 2018. There were 8 hedge funds in our database with DAVA holdings at the end of the previous quarter. 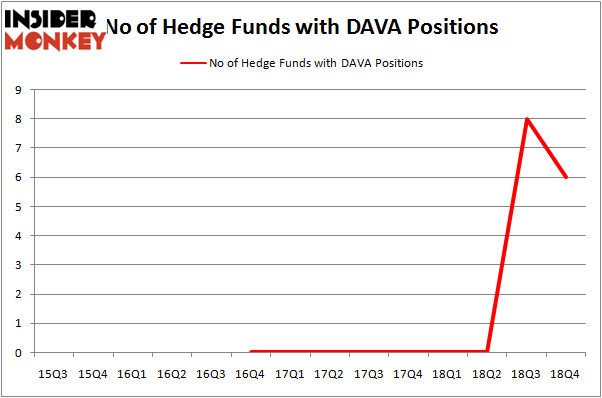 According to Insider Monkey’s hedge fund database, Richard Driehaus’s Driehaus Capital has the biggest position in Endava plc (NYSE:DAVA), worth close to $11.9 million, amounting to 0.5% of its total 13F portfolio. The second largest stake is held by Ken Griffin of Citadel Investment Group, with a $0.8 million position; the fund has less than 0.1%% of its 13F portfolio invested in the stock. Remaining hedge funds and institutional investors with similar optimism consist of Paul Marshall and Ian Wace’s Marshall Wace LLP, Israel Englander’s Millennium Management and Benjamin A. Smith’s Laurion Capital Management.

Since Endava plc (NYSE:DAVA) has faced falling interest from the aggregate hedge fund industry, we can see that there exists a select few funds that slashed their entire stakes by the end of the third quarter. At the top of the heap, Anand Parekh’s Alyeska Investment Group said goodbye to the largest stake of all the hedgies monitored by Insider Monkey, totaling an estimated $5.2 million in stock. Michael Platt and William Reeves’s fund, BlueCrest Capital Mgmt., also sold off its stock, about $1.1 million worth. These transactions are interesting, as aggregate hedge fund interest was cut by 2 funds by the end of the third quarter.

As you can see these stocks had an average of 13.75 hedge funds with bullish positions and the average amount invested in these stocks was $193 million. That figure was $15 million in DAVA’s case. Industrial Logistics Properties Trust (NASDAQ:ILPT) is the most popular stock in this table. On the other hand The Greenbrier Companies, Inc. (NYSE:GBX) is the least popular one with only 11 bullish hedge fund positions. Compared to these stocks Endava plc (NYSE:DAVA) is even less popular than GBX. Hedge funds clearly dropped the ball on DAVA as the stock delivered strong returns, though hedge funds’ consensus picks still generated respectable returns. Our calculations showed that top 15 most popular stocks) among hedge funds returned 24.2% through April 22nd and outperformed the S&P 500 ETF (SPY) by more than 7 percentage points. A small number of hedge funds were also right about betting on DAVA as the stock returned 42.2% and outperformed the market by an even larger margin.