Out of thousands of stocks that are currently traded on the market, it is difficult to identify those that will really generate strong returns. Hedge funds and institutional investors spend millions of dollars on analysts with MBAs and PhDs, who are industry experts and well connected to other industry and media insiders on top of that. Individual investors can piggyback the hedge funds employing these talents and can benefit from their vast resources and knowledge in that way. We analyze quarterly 13F filings of nearly 750 hedge funds and, by looking at the smart money sentiment that surrounds a stock, we can determine whether it has the potential to beat the market over the long-term. Therefore, let’s take a closer look at what smart money thinks about Eldorado Gold Corp (NYSE:EGO).

Eldorado Gold Corp (NYSE:EGO) was in 10 hedge funds’ portfolios at the end of June. EGO shareholders have witnessed a decrease in support from the world’s most elite money managers recently. There were 11 hedge funds in our database with EGO positions at the end of the previous quarter. Our calculations also showed that EGO isn’t among the 30 most popular stocks among hedge funds (see the video below). 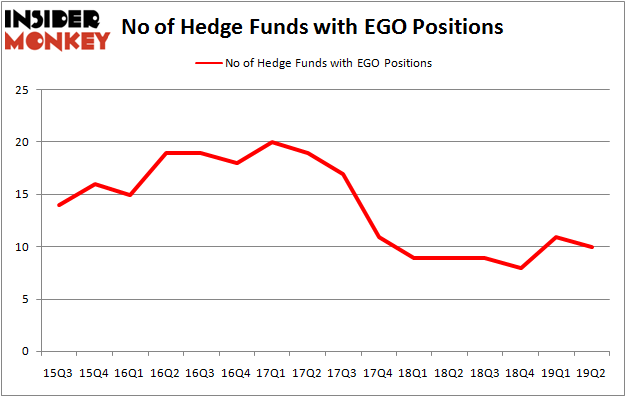 What does smart money think about Eldorado Gold Corp (NYSE:EGO)?

According to publicly available hedge fund and institutional investor holdings data compiled by Insider Monkey, Lansdowne Partners, managed by Alex Snow, holds the most valuable position in Eldorado Gold Corp (NYSE:EGO). Lansdowne Partners has a $31.3 million position in the stock, comprising 0.8% of its 13F portfolio. Sitting at the No. 2 spot is Renaissance Technologies, with a $21 million position; the fund has less than 0.1%% of its 13F portfolio invested in the stock. Remaining peers that hold long positions consist of Peter Franklin Palmedo’s Sun Valley Gold, D. E. Shaw’s D E Shaw and Israel Englander’s Millennium Management.

Due to the fact that Eldorado Gold Corp (NYSE:EGO) has experienced falling interest from the aggregate hedge fund industry, it’s easy to see that there lies a certain “tier” of fund managers who were dropping their full holdings last quarter. At the top of the heap, Paul Marshall and Ian Wace’s Marshall Wace LLP cut the largest investment of the “upper crust” of funds followed by Insider Monkey, totaling about $1.9 million in stock. Jim Roumell’s fund, Roumell Asset Management, also said goodbye to its stock, about $1 million worth. These bearish behaviors are interesting, as aggregate hedge fund interest dropped by 1 funds last quarter.

As you can see these stocks had an average of 10.25 hedge funds with bullish positions and the average amount invested in these stocks was $35 million. That figure was $62 million in EGO’s case. Marten Transport, Ltd (NASDAQ:MRTN) is the most popular stock in this table. On the other hand Organigram Holdings Inc. (NASDAQ:OGI) is the least popular one with only 5 bullish hedge fund positions. Eldorado Gold Corp (NYSE:EGO) is not the least popular stock in this group but hedge fund interest is still below average. Our calculations showed that top 20 most popular stocks among hedge funds returned 24.4% in 2019 through September 30th and outperformed the S&P 500 ETF (SPY) by 4 percentage points. A small number of hedge funds were also right about betting on EGO as the stock returned 33.5% during the same time frame and outperformed the market by an even larger margin.