As we already know from media reports and hedge fund investor letters, hedge funds delivered their best returns in a decade. Most investors who decided to stick with hedge funds after a rough 2018 recouped their losses by the end of the second quarter. We get to see hedge funds’ thoughts towards the market and individual stocks by aggregating their quarterly portfolio movements and reading their investor letters. In this article, we will particularly take a look at what hedge funds think about Echostar Corporation (NASDAQ:SATS).

Echostar Corporation (NASDAQ:SATS) shareholders have witnessed a decrease in activity from the world’s largest hedge funds of late. SATS was in 28 hedge funds’ portfolios at the end of the second quarter of 2019. There were 29 hedge funds in our database with SATS holdings at the end of the previous quarter. Our calculations also showed that SATS isn’t among the 30 most popular stocks among hedge funds (view the video below).

According to most investors, hedge funds are viewed as underperforming, old financial vehicles of the past. While there are over 8000 funds in operation at present, Our experts hone in on the top tier of this group, approximately 750 funds. Most estimates calculate that this group of people manage the majority of the smart money’s total asset base, and by monitoring their highest performing picks, Insider Monkey has unsheathed various investment strategies that have historically outrun Mr. Market. Insider Monkey’s flagship hedge fund strategy surpassed the S&P 500 index by around 5 percentage points per year since its inception in May 2014. We were able to generate large returns even by identifying short candidates. Our portfolio of short stocks lost 25.7% since February 2017 (through September 30th) even though the market was up more than 33% during the same period. We just shared a list of 10 short targets in our latest quarterly update .

What does smart money think about Echostar Corporation (NASDAQ:SATS)? 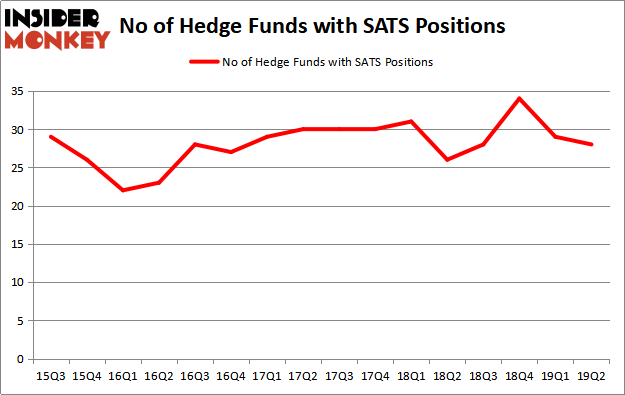 The largest stake in Echostar Corporation (NASDAQ:SATS) was held by Renaissance Technologies, which reported holding $157.4 million worth of stock at the end of March. It was followed by Mangrove Partners with a $68 million position. Other investors bullish on the company included Millennium Management, Park West Asset Management, and Indaba Capital Management.

Because Echostar Corporation (NASDAQ:SATS) has faced bearish sentiment from the entirety of the hedge funds we track, it’s safe to say that there exists a select few hedge funds that decided to sell off their entire stakes in the second quarter. At the top of the heap, Noah Levy and Eugene Dozortsev’s Newtyn Management said goodbye to the biggest stake of the “upper crust” of funds monitored by Insider Monkey, worth an estimated $10.9 million in stock, and Brett Hendrickson’s Nokomis Capital was right behind this move, as the fund dumped about $2.1 million worth. These moves are interesting, as total hedge fund interest fell by 1 funds in the second quarter.

As you can see these stocks had an average of 16.25 hedge funds with bullish positions and the average amount invested in these stocks was $299 million. That figure was $563 million in SATS’s case. Aaron’s, Inc. (NYSE:AAN) is the most popular stock in this table. On the other hand Sinopec Shanghai Petrochemical Co. (NYSE:SHI) is the least popular one with only 5 bullish hedge fund positions. Compared to these stocks Echostar Corporation (NASDAQ:SATS) is more popular among hedge funds. Our calculations showed that top 20 most popular stocks among hedge funds returned 24.4% in 2019 through September 30th and outperformed the S&P 500 ETF (SPY) by 4 percentage points. Hedge funds were also right about betting on SATS as the stock returned 10.3% during Q3 and outperformed the market by an even larger margin. Hedge funds were clearly right about piling into this stock relative to other stocks with similar market capitalizations.