Hedge fund managers like David Einhorn, Bill Ackman, or Carl Icahn became billionaires through reaping large profits for their investors, which is why piggybacking their stock picks may provide us with significant returns as well. Many hedge funds, like Paul Singer’s Elliott Management, are pretty secretive, but we can still get some insights by analyzing their quarterly 13F filings. One of the most fertile grounds for large abnormal returns is hedge funds’ most popular small-cap picks, which are not so widely followed and often trade at a discount to their intrinsic value. In this article we will check out hedge fund activity in another small-cap stock: Eagle Materials, Inc. (NYSE:EXP).

Eagle Materials, Inc. (NYSE:EXP) was in 25 hedge funds’ portfolios at the end of December. EXP investors should pay attention to a decrease in enthusiasm from smart money lately. There were 32 hedge funds in our database with EXP holdings at the end of the previous quarter. Our calculations also showed that EXP isn’t among the 30 most popular stocks among hedge funds.

In the 21st century investor’s toolkit there are tons of tools stock traders use to grade publicly traded companies. Two of the less utilized tools are hedge fund and insider trading indicators. Our experts have shown that, historically, those who follow the best picks of the elite money managers can outperform the S&P 500 by a significant margin (see the details here).

What have hedge funds been doing with Eagle Materials, Inc. (NYSE:EXP)?

At the end of the fourth quarter, a total of 25 of the hedge funds tracked by Insider Monkey were long this stock, a change of -22% from one quarter earlier. Below, you can check out the change in hedge fund sentiment towards EXP over the last 14 quarters. With hedgies’ capital changing hands, there exists a few notable hedge fund managers who were adding to their stakes meaningfully (or already accumulated large positions). 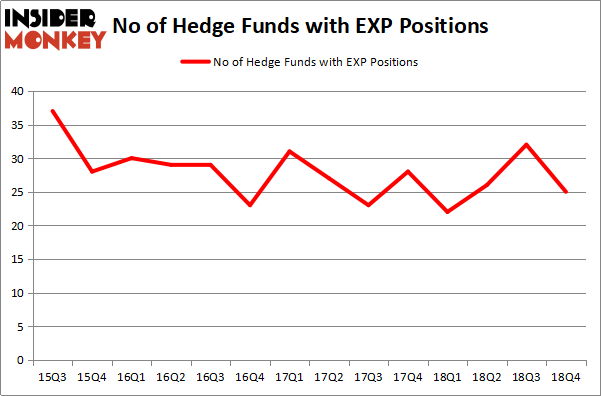 Among these funds, Adage Capital Management held the most valuable stake in Eagle Materials, Inc. (NYSE:EXP), which was worth $140.5 million at the end of the third quarter. On the second spot was Maverick Capital which amassed $116.5 million worth of shares. Moreover, Gates Capital Management, Renaissance Technologies, and Citadel Investment Group were also bullish on Eagle Materials, Inc. (NYSE:EXP), allocating a large percentage of their portfolios to this stock.

Judging by the fact that Eagle Materials, Inc. (NYSE:EXP) has faced bearish sentiment from the entirety of the hedge funds we track, it’s safe to say that there were a few money managers that decided to sell off their full holdings heading into Q3. It’s worth mentioning that Gabriel Plotkin’s Melvin Capital Management dumped the biggest position of all the hedgies monitored by Insider Monkey, comprising about $123.6 million in stock. Matthew Sidman’s fund, Three Bays Capital, also said goodbye to its stock, about $45.3 million worth. These moves are intriguing to say the least, as aggregate hedge fund interest fell by 7 funds heading into Q3.

Let’s check out hedge fund activity in other stocks – not necessarily in the same industry as Eagle Materials, Inc. (NYSE:EXP) but similarly valued. These stocks are Mercury General Corporation (NYSE:MCY), ASGN Incorporated (NYSE:ASGN), MOGU Inc. (NYSE:MOG), and TreeHouse Foods Inc. (NYSE:THS). All of these stocks’ market caps are closest to EXP’s market cap.

As you can see these stocks had an average of 17.75 hedge funds with bullish positions and the average amount invested in these stocks was $198 million. That figure was $520 million in EXP’s case. On Assignment, Inc. (NYSE:ASGN) is the most popular stock in this table. On the other hand MOGU Inc. (NYSE:MOG) is the least popular one with only 13 bullish hedge fund positions. Compared to these stocks Eagle Materials, Inc. (NYSE:EXP) is more popular among hedge funds. Our calculations showed that top 15 most popular stocks) among hedge funds returned 24.2% through April 22nd and outperformed the S&P 500 ETF (SPY) by more than 7 percentage points. Hedge funds were also right about betting on EXP as the stock returned 48.2% and outperformed the market by an even larger margin. Hedge funds were clearly right about piling into this stock relative to other stocks with similar market capitalizations.