Hedge Funds and other institutional investors have just completed filing their 13Fs with the Securities and Exchange Commission, revealing their equity portfolios as of the end of December. At Insider Monkey, we follow nearly 750 active hedge funds and notable investors and by analyzing their 13F filings, we can determine the stocks that they are collectively bullish on. One of their picks is Douglas Emmett, Inc. (NYSE:DEI), so let’s take a closer look at the sentiment that surrounds it in the current quarter.

Is Douglas Emmett, Inc. (NYSE:DEI) a sound investment now? The smart money is becoming less confident. The number of bullish hedge fund positions were trimmed by 2 in recent months. Our calculations also showed that DEI isn’t among the 30 most popular stocks among hedge funds. DEI was in 12 hedge funds’ portfolios at the end of December. There were 14 hedge funds in our database with DEI positions at the end of the previous quarter.

In the financial world there are many methods market participants use to evaluate their holdings. Two of the less utilized methods are hedge fund and insider trading interest. Our researchers have shown that, historically, those who follow the best picks of the best money managers can outperform their index-focused peers by a solid margin (see the details here).

At Q4’s end, a total of 12 of the hedge funds tracked by Insider Monkey were bullish on this stock, a change of -14% from the second quarter of 2018. On the other hand, there were a total of 10 hedge funds with a bullish position in DEI a year ago. With hedge funds’ sentiment swirling, there exists a few notable hedge fund managers who were upping their holdings substantially (or already accumulated large positions). 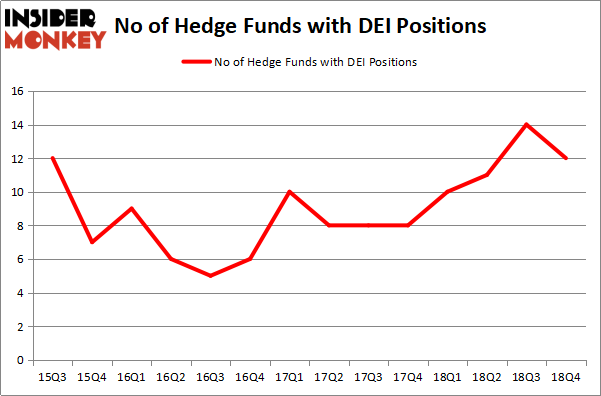 More specifically, Renaissance Technologies was the largest shareholder of Douglas Emmett, Inc. (NYSE:DEI), with a stake worth $126.1 million reported as of the end of September. Trailing Renaissance Technologies was AEW Capital Management, which amassed a stake valued at $72.1 million. Citadel Investment Group, D E Shaw, and Millennium Management were also very fond of the stock, giving the stock large weights in their portfolios.

Judging by the fact that Douglas Emmett, Inc. (NYSE:DEI) has experienced falling interest from the aggregate hedge fund industry, we can see that there were a few money managers who were dropping their entire stakes last quarter. Interestingly, Paul Marshall and Ian Wace’s Marshall Wace LLP dropped the largest stake of the 700 funds followed by Insider Monkey, comprising an estimated $14.2 million in stock, and Matthew Tewksbury’s Stevens Capital Management was right behind this move, as the fund sold off about $1.8 million worth. These moves are intriguing to say the least, as total hedge fund interest was cut by 2 funds last quarter.

Let’s now take a look at hedge fund activity in other stocks – not necessarily in the same industry as Douglas Emmett, Inc. (NYSE:DEI) but similarly valued. We will take a look at Jones Lang LaSalle Inc (NYSE:JLL), The Middleby Corporation (NASDAQ:MIDD), Etsy Inc (NASDAQ:ETSY), and Five Below Inc (NASDAQ:FIVE). All of these stocks’ market caps are closest to DEI’s market cap.

As you can see these stocks had an average of 26.75 hedge funds with bullish positions and the average amount invested in these stocks was $621 million. That figure was $328 million in DEI’s case. Etsy Inc (NASDAQ:ETSY) is the most popular stock in this table. On the other hand The Middleby Corporation (NASDAQ:MIDD) is the least popular one with only 17 bullish hedge fund positions. Compared to these stocks Douglas Emmett, Inc. (NYSE:DEI) is even less popular than MIDD. Considering that hedge funds aren’t fond of this stock in relation to other companies analyzed in this article, it may be a good idea to analyze it in detail and understand why the smart money isn’t behind this stock. This isn’t necessarily bad news. Although it is possible that hedge funds may think the stock is overpriced and view the stock as a short candidate, they may not be very familiar with the bullish thesis. Our calculations showed that top 15 most popular stocks among hedge funds returned 21.3% through April 8th and outperformed the S&P 500 ETF (SPY) by more than 5 percentage points. Hedge funds were also right about betting on DEI as the stock returned 22.4% and outperformed the market as well.