Did Hedge Funds Drop The Ball On Domo Inc. (DOMO) ?

Legendary investors such as Jeffrey Talpins and Seth Klarman earn enormous amounts of money for themselves and their investors by doing in-depth research on small-cap stocks that big brokerage houses don’t publish. Small cap stocks -especially when they are screened well- can generate substantial outperformance versus a boring index fund. That’s why we analyze the activity of those elite funds in these small-cap stocks. In the following paragraphs, we analyze Domo Inc. (NASDAQ:DOMO) from the perspective of those elite funds.

Is Domo Inc. (NASDAQ:DOMO) the right investment to pursue these days? Money managers are getting less bullish. The number of bullish hedge fund bets were cut by 2 recently. Our calculations also showed that domo isn’t among the 30 most popular stocks among hedge funds.

According to most traders, hedge funds are assumed to be unimportant, old investment vehicles of years past. While there are over 8000 funds in operation at present, Our experts look at the upper echelon of this group, around 750 funds. Most estimates calculate that this group of people direct most of the hedge fund industry’s total asset base, and by tailing their highest performing stock picks, Insider Monkey has unsheathed many investment strategies that have historically outperformed the market. Insider Monkey’s flagship hedge fund strategy surpassed the S&P 500 index by nearly 5 percentage points per annum since its inception in May 2014 through early November 2018. We were able to generate large returns even by identifying short candidates. Our portfolio of short stocks lost 27.5% since February 2017 (through March 12th) even though the market was up nearly 25% during the same period. We just shared a list of 6 short targets in our latest quarterly update and they are already down an average of 6% in less than a month.

How have hedgies been trading Domo Inc. (NASDAQ:DOMO)?

At the end of the fourth quarter, a total of 13 of the hedge funds tracked by Insider Monkey held long positions in this stock, a change of -13% from one quarter earlier. Below, you can check out the change in hedge fund sentiment towards DOMO over the last 14 quarters. With hedge funds’ capital changing hands, there exists an “upper tier” of noteworthy hedge fund managers who were adding to their stakes substantially (or already accumulated large positions). 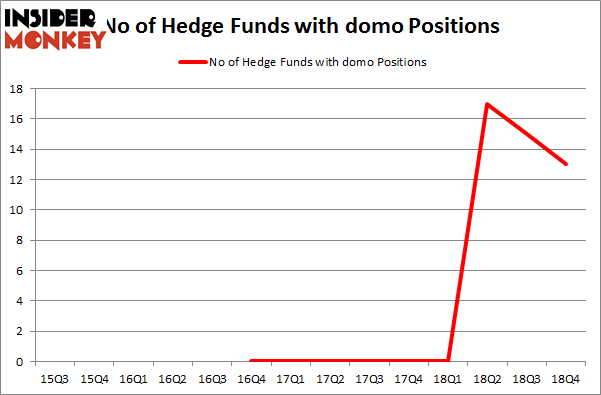 According to publicly available hedge fund and institutional investor holdings data compiled by Insider Monkey, Daniel Patrick Gibson’s Sylebra Capital Management has the biggest position in Domo Inc. (NASDAQ:DOMO), worth close to $46.9 million, comprising 3.6% of its total 13F portfolio. The second largest stake is held by Millennium Management, managed by Israel Englander, which holds a $9.2 million position; the fund has less than 0.1%% of its 13F portfolio invested in the stock. Remaining members of the smart money that are bullish include Seth Wunder’s Black-and-White Capital, David Costen Haley’s HBK Investments and Louis Bacon’s Moore Global Investments.

Due to the fact that Domo Inc. (NASDAQ:DOMO) has witnessed falling interest from the smart money, it’s safe to say that there is a sect of hedge funds that elected to cut their positions entirely by the end of the third quarter. Interestingly, Joshua Friedman and Mitchell Julis’s Canyon Capital Advisors dropped the largest stake of the 700 funds followed by Insider Monkey, comprising about $2 million in stock. Benjamin A. Smith’s fund, Laurion Capital Management, also cut its stock, about $1.3 million worth. These bearish behaviors are important to note, as total hedge fund interest dropped by 2 funds by the end of the third quarter.

Let’s go over hedge fund activity in other stocks – not necessarily in the same industry as Domo Inc. (NASDAQ:DOMO) but similarly valued. We will take a look at Boston Omaha Corporation (NASDAQ:BOMN), Global Indemnity Limited (NASDAQ:GBLI), Ribbon Communications Inc. (NASDAQ:RBBN), and Universal Logistics Holdings, Inc. (NASDAQ:ULH). All of these stocks’ market caps are closest to DOMO’s market cap.

As you can see these stocks had an average of 8.75 hedge funds with bullish positions and the average amount invested in these stocks was $67 million. That figure was $77 million in DOMO’s case. Ribbon Communications Inc. (NASDAQ:RBBN) is the most popular stock in this table. On the other hand Boston Omaha Corporation (NASDAQ:BOMN) is the least popular one with only 4 bullish hedge fund positions. Domo Inc. (NASDAQ:DOMO) is not the most popular stock in this group but hedge fund interest is still above average. Our calculations showed that top 15 most popular stocks) among hedge funds returned 24.2% through April 22nd and outperformed the S&P 500 ETF (SPY) by more than 7 percentage points. Hedge funds were also right about betting on DOMO as the stock returned 82.5% and outperformed the market by an even larger margin. Hedge funds were rewarded for their relative bullishness.