DISH Network Corp. (NASDAQ:DISH) was in 37 hedge funds’ portfolios at the end of the fourth quarter of 2018. DISH has seen a decrease in hedge fund sentiment of late. There were 41 hedge funds in our database with DISH positions at the end of the previous quarter. Our calculations also showed that DISH isn’t among the 30 most popular stocks among hedge funds.

How have hedgies been trading DISH Network Corp. (NASDAQ:DISH)? 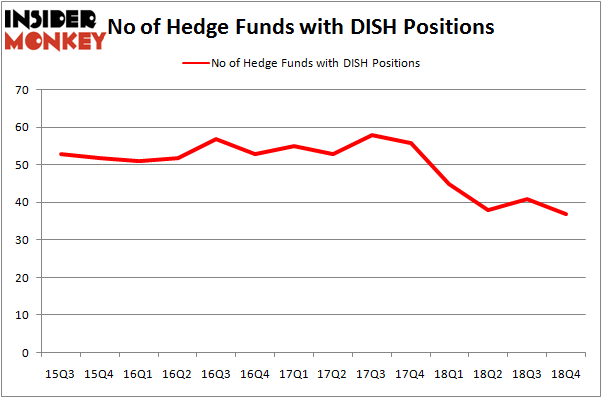 When looking at the institutional investors followed by Insider Monkey, Boykin Curry’s Eagle Capital Management has the biggest position in DISH Network Corp. (NASDAQ:DISH), worth close to $345.7 million, amounting to 1.4% of its total 13F portfolio. The second largest stake is held by Paulson & Co, managed by John Paulson, which holds a $124.2 million position; 3% of its 13F portfolio is allocated to the stock. Remaining hedge funds and institutional investors that are bullish contain Scott Bessent’s Key Square Capital Management, Mario Gabelli’s GAMCO Investors and Matthew Knauer and Mina Faltas’s Nokota Management.

Seeing as DISH Network Corp. (NASDAQ:DISH) has witnessed bearish sentiment from the aggregate hedge fund industry, it’s easy to see that there lies a certain “tier” of funds who were dropping their full holdings in the third quarter. At the top of the heap, James Dinan’s York Capital Management cut the biggest investment of all the hedgies watched by Insider Monkey, worth close to $29.8 million in stock. Leon Cooperman’s fund, Omega Advisors, also sold off its stock, about $26.5 million worth. These bearish behaviors are important to note, as total hedge fund interest fell by 4 funds in the third quarter.

As you can see these stocks had an average of 25 hedge funds with bullish positions and the average amount invested in these stocks was $574 million. That figure was $1274 million in DISH’s case. Keysight Technologies Inc (NYSE:KEYS) is the most popular stock in this table. On the other hand Elanco Animal Health Incorporated (NYSE:ELAN) is the least popular one with only 18 bullish hedge fund positions. Compared to these stocks DISH Network Corp. (NASDAQ:DISH) is more popular among hedge funds. Considering that hedge funds are fond of this stock in relation to its market cap peers, it may be a good idea to analyze it in detail and potentially include it in your portfolio. Our calculations showed that top 15 most popular stocks among hedge funds returned 19.7% through March 15th and outperformed the S&P 500 ETF (SPY) by 6.6 percentage points. Hedge funds were also right about betting on DISH as the stock returned 30.4% and outperformed the market as well. You can see the entire list of these shrewd hedge funds here.