How do you pick the next stock to invest in? One way would be to spend days of research browsing through thousands of publicly traded companies. However, an easier way is to look at the stocks that smart money investors are collectively bullish on. Hedge funds and other institutional investors usually invest large amounts of capital and have to conduct due diligence while choosing their next pick. They don’t always get it right, but, on average, their stock picks historically generated strong returns after adjusting for known risk factors. With this in mind, let’s take a look at the recent hedge fund activity surrounding Dicks Sporting Goods Inc (NYSE:DKS).

Dicks Sporting Goods Inc (NYSE:DKS) shareholders have witnessed an increase in activity from the world’s largest hedge funds recently. Our calculations also showed that DKS isn’t among the 30 most popular stocks among hedge funds (view the video below).

According to most shareholders, hedge funds are perceived as slow, outdated investment tools of yesteryear. While there are more than 8000 funds with their doors open at present, Our experts hone in on the leaders of this club, about 750 funds. These investment experts have their hands on bulk of all hedge funds’ total asset base, and by watching their top investments, Insider Monkey has unsheathed numerous investment strategies that have historically surpassed Mr. Market. Insider Monkey’s flagship hedge fund strategy outstripped the S&P 500 index by around 5 percentage points per year since its inception in May 2014. We were able to generate large returns even by identifying short candidates. Our portfolio of short stocks lost 25.7% since February 2017 (through September 30th) even though the market was up more than 33% during the same period. We just shared a list of 10 short targets in our latest quarterly update .

How have hedgies been trading Dicks Sporting Goods Inc (NYSE:DKS)?

Heading into the third quarter of 2019, a total of 23 of the hedge funds tracked by Insider Monkey held long positions in this stock, a change of 15% from the first quarter of 2019. The graph below displays the number of hedge funds with bullish position in DKS over the last 16 quarters. With hedgies’ capital changing hands, there exists a select group of noteworthy hedge fund managers who were upping their holdings considerably (or already accumulated large positions). 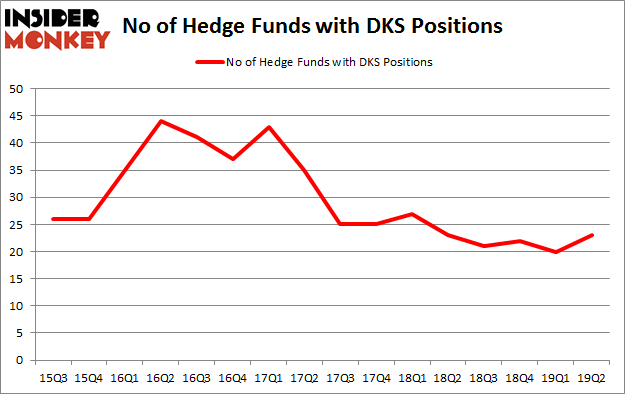 Of the funds tracked by Insider Monkey, D. E. Shaw’s D E Shaw has the most valuable position in Dicks Sporting Goods Inc (NYSE:DKS), worth close to $76.2 million, comprising 0.1% of its total 13F portfolio. The second largest stake is held by AQR Capital Management, managed by Cliff Asness, which holds a $73.1 million position; the fund has 0.1% of its 13F portfolio invested in the stock. Some other hedge funds and institutional investors with similar optimism encompass Ken Griffin’s Citadel Investment Group, Douglas Dossey and Arthur Young’s Tensile Capital and Robert Pohly’s Samlyn Capital.

As industrywide interest jumped, key hedge funds have been driving this bullishness. Samlyn Capital, managed by Robert Pohly, established the most valuable position in Dicks Sporting Goods Inc (NYSE:DKS). Samlyn Capital had $15.6 million invested in the company at the end of the quarter. Philippe Laffont’s Coatue Management also initiated a $2.5 million position during the quarter. The other funds with brand new DKS positions are Michael Gelband’s ExodusPoint Capital, Mike Vranos’s Ellington, and Israel Englander’s Millennium Management.

As you can see these stocks had an average of 21.5 hedge funds with bullish positions and the average amount invested in these stocks was $201 million. That figure was $325 million in DKS’s case. Stitch Fix, Inc. (NASDAQ:SFIX) is the most popular stock in this table. On the other hand Merit Medical Systems, Inc. (NASDAQ:MMSI) is the least popular one with only 17 bullish hedge fund positions. Dicks Sporting Goods Inc (NYSE:DKS) is not the most popular stock in this group but hedge fund interest is still above average. Our calculations showed that top 20 most popular stocks among hedge funds returned 24.4% in 2019 through September 30th and outperformed the S&P 500 ETF (SPY) by 4 percentage points. Hedge funds were also right about betting on DKS as the stock returned 18.7% during the third quarter and outperformed the market. Hedge funds were rewarded for their relative bullishness.