Did Hedge Funds Drop The Ball On Diamond Offshore Drilling Inc (DO) ?

Legendary investors such as Jeffrey Talpins and Seth Klarman earn enormous amounts of money for themselves and their investors by doing in-depth research on small-cap stocks that big brokerage houses don’t publish. Small cap stocks -especially when they are screened well- can generate substantial outperformance versus a boring index fund. That’s why we analyze the activity of those elite funds in these small-cap stocks. In the following paragraphs, we analyze Diamond Offshore Drilling Inc (NYSE:DO) from the perspective of those elite funds.

Is Diamond Offshore Drilling Inc (NYSE:DO) a bargain? The smart money is selling. The number of bullish hedge fund bets were cut by 3 in recent months. Our calculations also showed that DO isn’t among the 30 most popular stocks among hedge funds. DO was in 16 hedge funds’ portfolios at the end of December. There were 19 hedge funds in our database with DO positions at the end of the previous quarter.

If you’d ask most stock holders, hedge funds are perceived as slow, outdated financial vehicles of yesteryear. While there are over 8000 funds in operation at present, We choose to focus on the top tier of this group, around 750 funds. These money managers preside over bulk of the smart money’s total capital, and by observing their best equity investments, Insider Monkey has brought to light a few investment strategies that have historically defeated the broader indices. Insider Monkey’s flagship hedge fund strategy outstripped the S&P 500 index by nearly 5 percentage points per year since its inception in May 2014 through early November 2018. We were able to generate large returns even by identifying short candidates. Our portfolio of short stocks lost 27.5% since February 2017 (through March 12th) even though the market was up nearly 25% during the same period. We just shared a list of 6 short targets in our latest quarterly update and they are already down an average of 6% in less than a month. 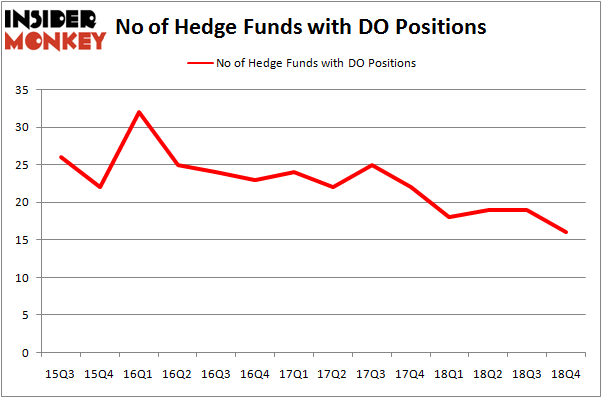 The largest stake in Diamond Offshore Drilling Inc (NYSE:DO) was held by Fisher Asset Management, which reported holding $10.4 million worth of stock at the end of December. It was followed by Renaissance Technologies with a $9.9 million position. Other investors bullish on the company included Citadel Investment Group, AQR Capital Management, and Vertex One Asset Management.

Since Diamond Offshore Drilling Inc (NYSE:DO) has experienced a decline in interest from the aggregate hedge fund industry, logic holds that there was a specific group of hedge funds who sold off their full holdings heading into Q3. At the top of the heap, Till Bechtolsheimer’s Arosa Capital Management said goodbye to the biggest stake of the “upper crust” of funds monitored by Insider Monkey, totaling close to $10 million in stock, and Steve Cohen’s Point72 Asset Management was right behind this move, as the fund cut about $1.5 million worth. These moves are interesting, as total hedge fund interest was cut by 3 funds heading into Q3.

As you can see these stocks had an average of 15.5 hedge funds with bullish positions and the average amount invested in these stocks was $185 million. That figure was $40 million in DO’s case. SPX FLOW, Inc. (NYSE:FLOW) is the most popular stock in this table. On the other hand HFF, Inc. (NYSE:HF) is the least popular one with only 13 bullish hedge fund positions. Diamond Offshore Drilling Inc (NYSE:DO) is not the most popular stock in this group but hedge fund interest is still above average. Our calculations showed that top 15 most popular stocks) among hedge funds returned 24.2% through April 22nd and outperformed the S&P 500 ETF (SPY) by more than 7 percentage points. Hedge funds were also right about betting on DO as the stock returned 30.1% and outperformed the market by an even larger margin. Hedge funds were rewarded for their relative bullishness.