At Insider Monkey, we pore over the filings of nearly 750 top investment firms every quarter, a process we have now completed for the latest reporting period. The data we’ve gathered as a result gives us access to a wealth of collective knowledge based on these firms’ portfolio holdings as of December 31. In this article, we will use that wealth of knowledge to determine whether or not DCP Midstream LP (NYSE:DCP) makes for a good investment right now.

DCP Midstream LP (NYSE:DCP) shares haven’t seen a lot of action during the third quarter. Overall, hedge fund sentiment was unchanged. The stock was in 5 hedge funds’ portfolios at the end of December. At the end of this article we will also compare DCP to other stocks including Sea Limited (NYSE:SE), AU Optronics Corp. (NYSE:AUO), and MGIC Investment Corporation (NYSE:MTG) to get a better sense of its popularity.

What have hedge funds been doing with DCP Midstream LP (NYSE:DCP)?

At the end of the fourth quarter, a total of 5 of the hedge funds tracked by Insider Monkey held long positions in this stock, a change of 0% from the second quarter of 2018. The graph below displays the number of hedge funds with bullish position in DCP over the last 14 quarters. With hedge funds’ positions undergoing their usual ebb and flow, there exists an “upper tier” of key hedge fund managers who were adding to their holdings considerably (or already accumulated large positions). 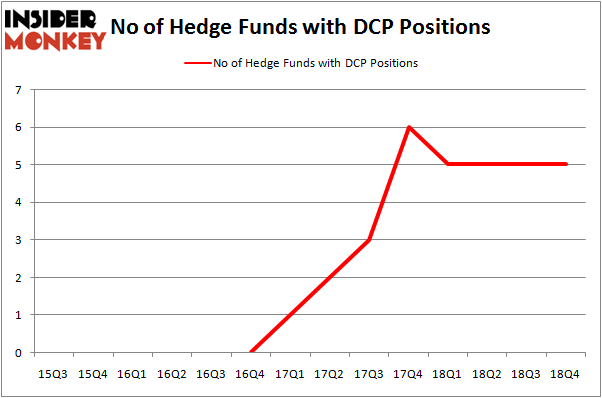 According to publicly available hedge fund and institutional investor holdings data compiled by Insider Monkey, Daniel Arbess’s Perella Weinberg Partners has the biggest position in DCP Midstream LP (NYSE:DCP), worth close to $9 million, corresponding to 0.6% of its total 13F portfolio. On Perella Weinberg Partners’s heels is Renaissance Technologies, managed by Jim Simons, which holds a $8.3 million position; the fund has less than 0.1%% of its 13F portfolio invested in the stock. Some other professional money managers that hold long positions include Ken Griffin’s Citadel Investment Group, Peter Rathjens, Bruce Clarke and John Campbell’s Arrowstreet Capital and Matthew Hulsizer’s PEAK6 Capital Management.

Due to the fact that DCP Midstream LP (NYSE:DCP) has witnessed falling interest from the entirety of the hedge funds we track, it’s safe to say that there lies a certain “tier” of fund managers who sold off their positions entirely heading into Q3. At the top of the heap, Israel Englander’s Millennium Management dropped the biggest investment of the “upper crust” of funds followed by Insider Monkey, valued at an estimated $1.1 million in stock. George Hall’s fund, Clinton Group, also dumped its stock, about $0.4 million worth. These moves are intriguing to say the least, as aggregate hedge fund interest stayed the same (this is a bearish signal in our experience).

As you can see these stocks had an average of 18.75 hedge funds with bullish positions and the average amount invested in these stocks was $245 million. That figure was $18 million in DCP’s case. MGIC Investment Corporation (NYSE:MTG) is the most popular stock in this table. On the other hand AU Optronics Corp. (NYSE:AUO) is the least popular one with only 9 bullish hedge fund positions. Compared to these stocks DCP Midstream LP (NYSE:DCP) is even less popular than AUO. Our calculations showed that top 15 most popular stocks) among hedge funds returned 24.2% through April 22nd and outperformed the S&P 500 ETF (SPY) by more than 7 percentage points. A small number of hedge funds were also right about betting on DCP, though not to the same extent, as the stock returned 24.1% and outperformed the market as well.