While the market driven by short-term sentiment influenced by uncertainty regarding the future of the interest rate environment in the US, declining oil prices and the trade war with China, many smart money investors kept their optimism regarding the current bull run in the fourth quarter, while still hedging many of their long positions. However, as we know, big investors usually buy stocks with strong fundamentals, which is why we believe we can profit from imitating them. In this article, we are going to take a look at the smart money sentiment surrounding DBV Technologies SA – ADR (NASDAQ:DBVT).

Is DBV Technologies SA – ADR (NASDAQ:DBVT) a bargain? Prominent investors are taking a pessimistic view. The number of long hedge fund positions were trimmed by 4 lately. Our calculations also showed that DBVT isn’t among the 30 most popular stocks among hedge funds. DBVT was in 5 hedge funds’ portfolios at the end of December. There were 9 hedge funds in our database with DBVT holdings at the end of the previous quarter.

In the 21st century investor’s toolkit there are several indicators market participants employ to grade stocks. A duo of the most innovative indicators are hedge fund and insider trading interest. Our researchers have shown that, historically, those who follow the best picks of the elite fund managers can outperform the market by a superb amount (see the details here).

How have hedgies been trading DBV Technologies SA – ADR (NASDAQ:DBVT)? 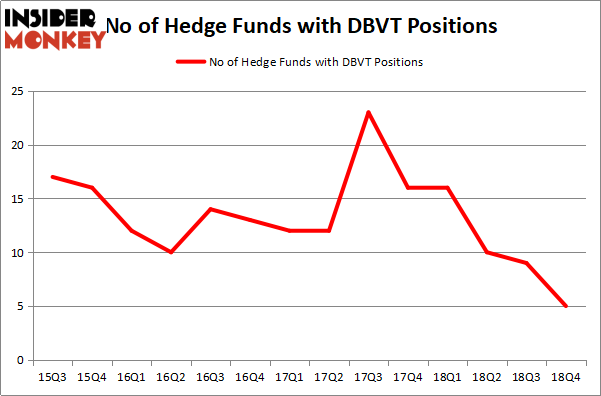 Among these funds, Baker Bros. Advisors held the most valuable stake in DBV Technologies SA – ADR (NASDAQ:DBVT), which was worth $35.4 million at the end of the fourth quarter. On the second spot was Perceptive Advisors which amassed $5.3 million worth of shares. Moreover, Vivo Capital, Citadel Investment Group, and PEAK6 Capital Management were also bullish on DBV Technologies SA – ADR (NASDAQ:DBVT), allocating a large percentage of their portfolios to this stock.

Since DBV Technologies SA – ADR (NASDAQ:DBVT) has faced falling interest from the aggregate hedge fund industry, logic holds that there is a sect of hedgies that slashed their entire stakes in the third quarter. At the top of the heap, James E. Flynn’s Deerfield Management dumped the biggest investment of the “upper crust” of funds monitored by Insider Monkey, valued at about $65.1 million in stock, and Samuel Isaly’s OrbiMed Advisors was right behind this move, as the fund sold off about $14.9 million worth. These bearish behaviors are intriguing to say the least, as aggregate hedge fund interest fell by 4 funds in the third quarter.

As you can see these stocks had an average of 13.75 hedge funds with bullish positions and the average amount invested in these stocks was $47 million. That figure was $43 million in DBVT’s case. William Lyon Homes (NYSE:WLH) is the most popular stock in this table. On the other hand City Office REIT Inc (NYSE:CIO) is the least popular one with only 6 bullish hedge fund positions. Compared to these stocks DBV Technologies SA – ADR (NASDAQ:DBVT) is even less popular than CIO. Hedge funds clearly dropped the ball on DBVT as the stock delivered strong returns, though hedge funds’ consensus picks still generated respectable returns. Our calculations showed that top 15 most popular stocks) among hedge funds returned 24.2% through April 22nd and outperformed the S&P 500 ETF (SPY) by more than 7 percentage points. A small number of hedge funds were also right about betting on DBVT as the stock returned 35.2% and outperformed the market by an even larger margin.