The 700+ hedge funds and famous money managers tracked by Insider Monkey have already compiled and submitted their 13F filings for the second quarter, which unveil their equity positions as of June 28. We went through these filings, fixed typos and other more significant errors and identified the changes in hedge fund portfolios. Our extensive review of these public filings is finally over, so this article is set to reveal the smart money sentiment towards Cutera, Inc. (NASDAQ:CUTR).

Is Cutera, Inc. (NASDAQ:CUTR) the right pick for your portfolio? Prominent investors are getting less bullish. The number of bullish hedge fund positions dropped by 4 recently. Our calculations also showed that CUTR isn’t among the 30 most popular stocks among hedge funds (see the video below).

At the end of the second quarter, a total of 10 of the hedge funds tracked by Insider Monkey held long positions in this stock, a change of -29% from one quarter earlier. Below, you can check out the change in hedge fund sentiment towards CUTR over the last 16 quarters. With hedge funds’ capital changing hands, there exists an “upper tier” of key hedge fund managers who were upping their stakes substantially (or already accumulated large positions). 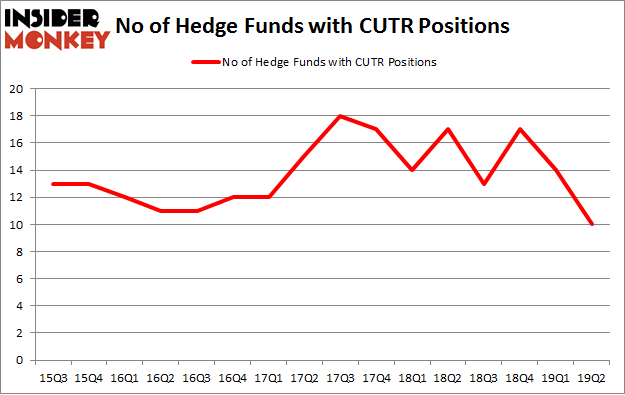 More specifically, GAMCO Investors was the largest shareholder of Cutera, Inc. (NASDAQ:CUTR), with a stake worth $23.3 million reported as of the end of March. Trailing GAMCO Investors was Renaissance Technologies, which amassed a stake valued at $13.5 million. Archon Capital Management, Voce Capital, and Millennium Management were also very fond of the stock, giving the stock large weights in their portfolios.

Due to the fact that Cutera, Inc. (NASDAQ:CUTR) has experienced declining sentiment from the entirety of the hedge funds we track, we can see that there is a sect of fund managers that decided to sell off their full holdings in the second quarter. It’s worth mentioning that Ken Griffin’s Citadel Investment Group cut the largest position of the 750 funds monitored by Insider Monkey, totaling close to $1.8 million in stock, and Bradley Louis Radoff’s Fondren Management was right behind this move, as the fund cut about $0.7 million worth. These moves are intriguing to say the least, as aggregate hedge fund interest was cut by 4 funds in the second quarter.

As you can see these stocks had an average of 7 hedge funds with bullish positions and the average amount invested in these stocks was $39 million. That figure was $65 million in CUTR’s case. Landec Corporation (NASDAQ:LNDC) is the most popular stock in this table. On the other hand Marlin Business Services Corp. (NASDAQ:MRLN) is the least popular one with only 3 bullish hedge fund positions. Cutera, Inc. (NASDAQ:CUTR) is not the most popular stock in this group but hedge fund interest is still above average. Our calculations showed that top 20 most popular stocks among hedge funds returned 24.4% in 2019 through September 30th and outperformed the S&P 500 ETF (SPY) by 4 percentage points. Hedge funds were also right about betting on CUTR as the stock returned 40.7% during the third quarter and outperformed the market. Hedge funds were rewarded for their relative bullishness.