Did Hedge Funds Drop The Ball On Cubic Corporation (CUB) ?

Is Cubic Corporation (NYSE:CUB) a safe investment today? The best stock pickers are becoming hopeful. The number of long hedge fund positions went up by 4 in recent months. Our calculations also showed that CUB isn’t among the 30 most popular stocks among hedge funds (view the video below).

Unlike former hedge manager, Dr. Steve Sjuggerud, who is convinced Dow will soar past 40000, our long-short investment strategy doesn’t rely on bull markets to deliver double digit returns. We only rely on hedge fund buy/sell signals. We’re going to take a look at the key hedge fund action regarding Cubic Corporation (NYSE:CUB).

What does smart money think about Cubic Corporation (NYSE:CUB)?

Heading into the third quarter of 2019, a total of 19 of the hedge funds tracked by Insider Monkey were long this stock, a change of 27% from the first quarter of 2019. On the other hand, there were a total of 13 hedge funds with a bullish position in CUB a year ago. With hedgies’ capital changing hands, there exists a few notable hedge fund managers who were adding to their stakes meaningfully (or already accumulated large positions). 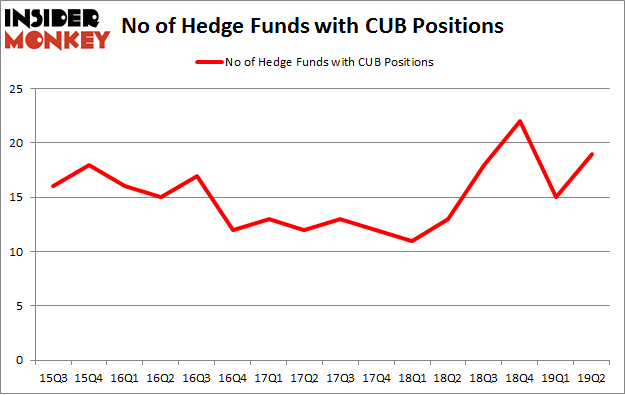 With a general bullishness amongst the heavyweights, key hedge funds were leading the bulls’ herd. Hudson Bay Capital Management, managed by Sander Gerber, established the most outsized position in Cubic Corporation (NYSE:CUB). Hudson Bay Capital Management had $4.6 million invested in the company at the end of the quarter. Benjamin A. Smith’s Laurion Capital Management also made a $0.9 million investment in the stock during the quarter. The other funds with brand new CUB positions are John Overdeck and David Siegel’s Two Sigma Advisors, Noam Gottesman’s GLG Partners, and Michael Gelband’s ExodusPoint Capital.

As you can see these stocks had an average of 17 hedge funds with bullish positions and the average amount invested in these stocks was $229 million. That figure was $55 million in CUB’s case. Conduent Incorporated (NYSE:CNDT) is the most popular stock in this table. On the other hand Great Western Bancorp Inc (NYSE:GWB) is the least popular one with only 9 bullish hedge fund positions. Cubic Corporation (NYSE:CUB) is not the most popular stock in this group but hedge fund interest is still above average. Our calculations showed that top 20 most popular stocks among hedge funds returned 24.4% in 2019 through September 30th and outperformed the S&P 500 ETF (SPY) by 4 percentage points. Hedge funds were also right about betting on CUB as the stock returned 9.4% during the third quarter and outperformed the market. Hedge funds were rewarded for their relative bullishness.