Did Hedge Funds Drop The Ball On CSX Corporation (CSX)?

“Value has performed relatively poorly since the 2017 shift, but we believe challenges to the S&P 500’s dominance are mounting and resulting active opportunities away from the index are growing. At some point, this fault line will break, likely on the back of rising rates, and all investors will be reminded that the best time to diversify away from the winners is when it is most painful. The bargain of capturing long-term value may be short-term pain, but enough is eventually enough and it comes time to harvest the benefits.,” said Clearbridge Investments in its market commentary. We aren’t sure whether long-term interest rates will top 5% and value stocks outperform growth, but we follow hedge fund investor letters to understand where the markets and stocks might be going. That’s why we believe it would be worthwhile to take a look at the hedge fund sentiment on CSX Corporation (NASDAQ:CSX) in order to identify whether reputable and successful top money managers continue to believe in its potential.

Is CSX Corporation (NASDAQ:CSX) a bargain? The best stock pickers are getting less bullish. The number of long hedge fund bets were cut by 4 lately. Our calculations also showed that CSX isn’t among the 30 most popular stocks among hedge funds.

In the financial world there are tons of indicators market participants have at their disposal to evaluate publicly traded companies. Some of the most underrated indicators are hedge fund and insider trading sentiment. We have shown that, historically, those who follow the best picks of the elite investment managers can beat the S&P 500 by a solid amount (see the details here).

At the end of the fourth quarter, a total of 50 of the hedge funds tracked by Insider Monkey were bullish on this stock, a change of -7% from the second quarter of 2018. Below, you can check out the change in hedge fund sentiment towards CSX over the last 14 quarters. So, let’s review which hedge funds were among the top holders of the stock and which hedge funds were making big moves. 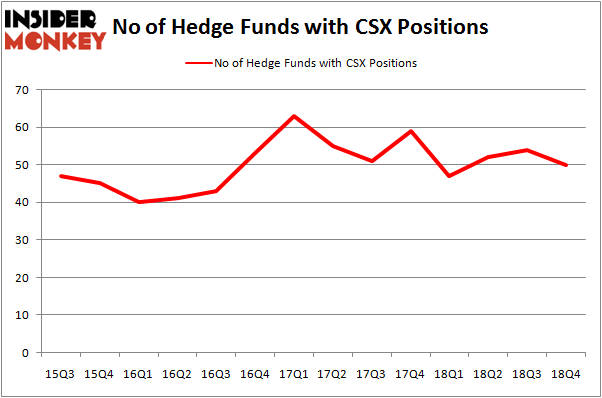 Among these funds, Mantle Ridge LP held the most valuable stake in CSX Corporation (NASDAQ:CSX), which was worth $2657 million at the end of the third quarter. On the second spot was Egerton Capital Limited which amassed $736.3 million worth of shares. Moreover, Lone Pine Capital, Millennium Management, and Steadfast Capital Management were also bullish on CSX Corporation (NASDAQ:CSX), allocating a large percentage of their portfolios to this stock.

Judging by the fact that CSX Corporation (NASDAQ:CSX) has witnessed declining sentiment from the smart money, it’s safe to say that there were a few fund managers that decided to sell off their positions entirely last quarter. Intriguingly, James Crichton’s Hitchwood Capital Management sold off the largest investment of the “upper crust” of funds followed by Insider Monkey, totaling close to $44.4 million in stock, and Alexander Mitchell’s Scopus Asset Management was right behind this move, as the fund dumped about $37.5 million worth. These bearish behaviors are intriguing to say the least, as total hedge fund interest fell by 4 funds last quarter.

As you can see these stocks had an average of 32 hedge funds with bullish positions and the average amount invested in these stocks was $1243 million. That figure was $5424 million in CSX’s case. Colgate-Palmolive Company (NYSE:CL) is the most popular stock in this table. On the other hand Vodafone Group Plc (NASDAQ:VOD) is the least popular one with only 18 bullish hedge fund positions. Compared to these stocks CSX Corporation (NASDAQ:CSX) is more popular among hedge funds. Even though some hedge funds sold out their CSX holdings during the last quarter, hedge fund sentiment towards CSX is still very bullish. Our calculations showed that top 15 most popular stocks among hedge funds returned 19.7% through March 15th and outperformed the S&P 500 ETF (SPY) by 6.6 percentage points. Hedge funds were also right about betting on CSX, though not to the same extent, as the stock returned 17.6% and outperformed the market as well.

Were Hedge Funds Right About Dumping Twenty-First Century Fox Inc (FOX)?
Monthly Newsletter Strategy
Download a free copy of our newsletter and see the details inside!
Hedge Fund Resource Center
Related News
Should You Buy CSX Corporation (CSX)? Financial Markets Snapshot: 20+ Stories That You Should Read Today Why Apple, Netflix, Intel, and More Are Trending Today Analysts Chime in on Corning, Quest Diagnostics, Canadian Pacific, Norfolk Southern, and More Five Railroad Stocks to Buy Now Is CSX Corporation (CSX) A Good Stock To Buy? Here’s What Analysts Had to Say About These Trending Stocks Ten of the Most Common Addictions 13 African Countries with the Largest White Population in 2018 6 Causes of Human Trafficking in Africa, India, and US
Billionaire Hedge Funds