Hedge funds are not perfect. They have their bad picks just like everyone else. Facebook, a stock hedge funds have loved, lost nearly 40% of its value at one point in 2018. Although hedge funds are not perfect, their consensus picks do deliver solid returns, however. Our data show the top 15 S&P 500 stocks among hedge funds at the end of December 2018 yielded an average return of 19.7% year-to-date, vs. a gain of 13.1% for the S&P 500 Index. Because hedge funds have a lot of resources and their consensus picks do well, we pay attention to what they think. In this article, we analyze what the elite funds think of Cronos Group Inc. (NASDAQ:CRON).

Is Cronos Group Inc. (NASDAQ:CRON) a healthy stock for your portfolio? Investors who are in the know are in a pessimistic mood. The number of long hedge fund positions went down by 6 in recent months. Our calculations also showed that cron isn’t among the 30 most popular stocks among hedge funds.

Heading into the first quarter of 2019, a total of 6 of the hedge funds tracked by Insider Monkey were bullish on this stock, a change of -50% from the second quarter of 2018. By comparison, 2 hedge funds held shares or bullish call options in CRON a year ago. With the smart money’s positions undergoing their usual ebb and flow, there exists an “upper tier” of key hedge fund managers who were increasing their stakes meaningfully (or already accumulated large positions). 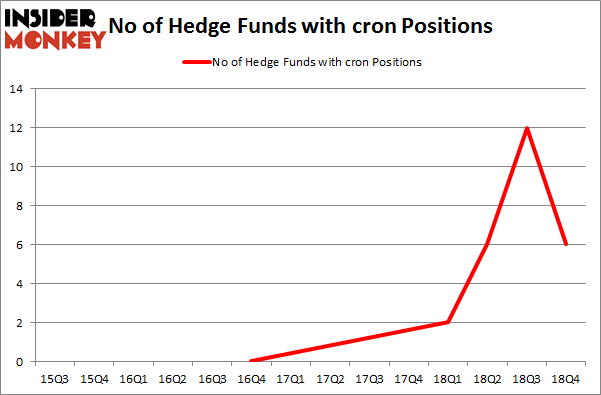 The largest stake in Cronos Group Inc. (NASDAQ:CRON) was held by Citadel Investment Group, which reported holding $6 million worth of stock at the end of September. It was followed by Two Sigma Advisors with a $4.1 million position. Other investors bullish on the company included HBK Investments, OZ Management, and Millennium Management.

Due to the fact that Cronos Group Inc. (NASDAQ:CRON) has faced a decline in interest from the entirety of the hedge funds we track, logic holds that there was a specific group of fund managers that slashed their entire stakes by the end of the third quarter. Interestingly, Barry Rosenstein’s JANA Partners dropped the biggest investment of the 700 funds tracked by Insider Monkey, comprising an estimated $3.3 million in stock. Joseph A. Jolson’s fund, Harvest Capital Strategies, also said goodbye to its stock, about $1.7 million worth. These bearish behaviors are intriguing to say the least, as aggregate hedge fund interest was cut by 6 funds by the end of the third quarter.

As you can see these stocks had an average of 10.5 hedge funds with bullish positions and the average amount invested in these stocks was $64 million. That figure was $10 million in CRON’s case. Washington Real Estate Investment Trust (NYSE:WRE) is the most popular stock in this table. On the other hand Grupo Aeroportuario del Centro Norte, S. A. B. de C. V. (NASDAQ:OMAB) is the least popular one with only 5 bullish hedge fund positions. Cronos Group Inc. (NASDAQ:CRON) is not the least popular stock in this group but hedge fund interest is still below average. Our calculations showed that top 15 most popular stocks) among hedge funds returned 24.2% through April 22nd and outperformed the S&P 500 ETF (SPY) by more than 7 percentage points. A small number of hedge funds were also right about betting on CRON as the stock returned 62.3% and outperformed the market by an even larger margin.