Did Hedge Funds Drop The Ball On Cree, Inc. (CREE) ?

The market has been volatile in the fourth quarter as the Federal Reserve continued its rate hikes to normalize the interest rates. Small cap stocks have been hit hard as a result, as the Russell 2000 ETF (IWM) has underperformed the larger S&P 500 ETF (SPY) by nearly 7 percentage points. SEC filings and hedge fund investor letters indicate that the smart money seems to be paring back their overall long exposure since summer months, and the funds’ movements is one of the reasons why the major indexes have retraced. In this article, we analyze what the smart money thinks of Cree, Inc. (NASDAQ:CREE) and find out how it is affected by hedge funds’ moves.

Is Cree, Inc. (NASDAQ:CREE) an outstanding stock to buy now? The best stock pickers are in a bearish mood. The number of long hedge fund positions decreased by 4 in recent months. Our calculations also showed that CREE isn’t among the 30 most popular stocks among hedge funds.

What have hedge funds been doing with Cree, Inc. (NASDAQ:CREE)?

At the end of the fourth quarter, a total of 9 of the hedge funds tracked by Insider Monkey held long positions in this stock, a change of -31% from the previous quarter. By comparison, 15 hedge funds held shares or bullish call options in CREE a year ago. With hedgies’ positions undergoing their usual ebb and flow, there exists an “upper tier” of notable hedge fund managers who were upping their holdings significantly (or already accumulated large positions). 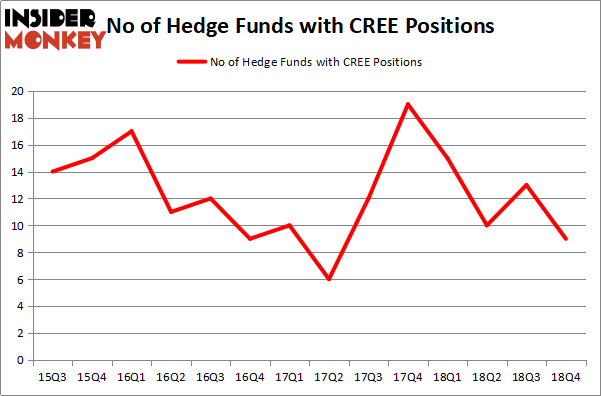 Among these funds, Iridian Asset Management held the most valuable stake in Cree, Inc. (NASDAQ:CREE), which was worth $175.5 million at the end of the third quarter. On the second spot was Columbus Circle Investors which amassed $29.9 million worth of shares. Moreover, Citadel Investment Group, Polar Capital, and PEAK6 Capital Management were also bullish on Cree, Inc. (NASDAQ:CREE), allocating a large percentage of their portfolios to this stock.

Due to the fact that Cree, Inc. (NASDAQ:CREE) has faced declining sentiment from the entirety of the hedge funds we track, it’s safe to say that there lies a certain “tier” of fund managers that elected to cut their full holdings by the end of the third quarter. Interestingly, Chuck Royce’s Royce & Associates sold off the largest position of the “upper crust” of funds followed by Insider Monkey, worth an estimated $5.3 million in stock. David Harding’s fund, Winton Capital Management, also sold off its stock, about $5.3 million worth. These bearish behaviors are intriguing to say the least, as total hedge fund interest was cut by 4 funds by the end of the third quarter.

As you can see these stocks had an average of 22.25 hedge funds with bullish positions and the average amount invested in these stocks was $255 million. That figure was $227 million in CREE’s case. AGCO Corporation (NYSE:AGCO) is the most popular stock in this table. On the other hand Empire State Realty Trust Inc (NYSE:ESRT) is the least popular one with only 13 bullish hedge fund positions. Compared to these stocks Cree, Inc. (NASDAQ:CREE) is even less popular than ESRT. Hedge funds clearly dropped the ball on CREE as the stock delivered strong returns, though hedge funds’ consensus picks still generated respectable returns. Our calculations showed that top 15 most popular stocks) among hedge funds returned 24.2% through April 22nd and outperformed the S&P 500 ETF (SPY) by more than 7 percentage points. A small number of hedge funds were also right about betting on CREE as the stock returned 57.6% and outperformed the market by an even larger margin.