Did Hedge Funds Drop The Ball On Corelogic Inc (CLGX) ?

Investing in small cap stocks has historically been a way to outperform the market, as small cap companies typically grow faster on average than the blue chips. That outperformance comes with a price, however, as there are occasional periods of higher volatility. The fourth quarter of 2018 is one of those periods, as the Russell 2000 ETF (IWM) has underperformed the larger S&P 500 ETF (SPY) by nearly 7 percentage points. Given that the funds we track tend to have a disproportionate amount of their portfolios in smaller cap stocks, they have seen some volatility in their portfolios too. Actually their moves are potentially one of the factors that contributed to this volatility. In this article, we use our extensive database of hedge fund holdings to find out what the smart money thinks of Corelogic Inc (NYSE:CLGX).

Corelogic Inc (NYSE:CLGX) has experienced a decrease in activity from the world’s largest hedge funds lately. Our calculations also showed that clgx isn’t among the 30 most popular stocks among hedge funds.

In the eyes of most traders, hedge funds are viewed as underperforming, outdated financial tools of years past. While there are over 8000 funds in operation at present, Our experts hone in on the upper echelon of this group, approximately 750 funds. These hedge fund managers shepherd the lion’s share of the smart money’s total asset base, and by observing their inimitable investments, Insider Monkey has come up with numerous investment strategies that have historically outperformed the market. Insider Monkey’s flagship hedge fund strategy beat the S&P 500 index by nearly 5 percentage points a year since its inception in May 2014 through early November 2018. We were able to generate large returns even by identifying short candidates. Our portfolio of short stocks lost 27.5% since February 2017 (through March 12th) even though the market was up nearly 25% during the same period. We just shared a list of 6 short targets in our latest quarterly update and they are already down an average of 6% in less than a month.

At Q4’s end, a total of 19 of the hedge funds tracked by Insider Monkey held long positions in this stock, a change of -5% from the second quarter of 2018. By comparison, 22 hedge funds held shares or bullish call options in CLGX a year ago. With hedge funds’ capital changing hands, there exists a few noteworthy hedge fund managers who were boosting their stakes considerably (or already accumulated large positions). 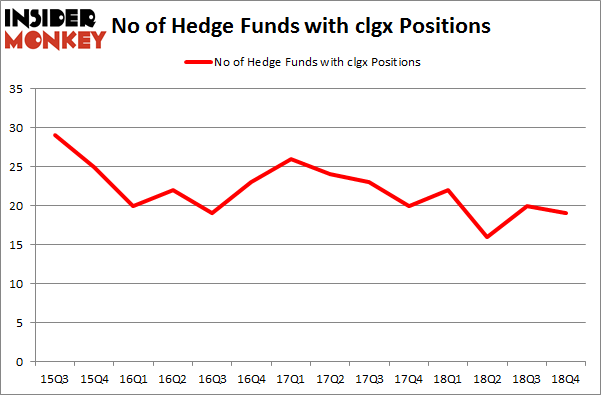 More specifically, D E Shaw was the largest shareholder of Corelogic Inc (NYSE:CLGX), with a stake worth $107.4 million reported as of the end of September. Trailing D E Shaw was Fisher Asset Management, which amassed a stake valued at $71 million. Echo Street Capital Management, Renaissance Technologies, and AQR Capital Management were also very fond of the stock, giving the stock large weights in their portfolios.

Since Corelogic Inc (NYSE:CLGX) has witnessed bearish sentiment from hedge fund managers, we can see that there exists a select few hedge funds that decided to sell off their entire stakes in the third quarter. Intriguingly, Will Cook’s Sunriver Management cut the biggest investment of all the hedgies monitored by Insider Monkey, valued at close to $20.5 million in stock, and David Harding’s Winton Capital Management was right behind this move, as the fund sold off about $6.1 million worth. These transactions are important to note, as aggregate hedge fund interest dropped by 1 funds in the third quarter.

As you can see these stocks had an average of 16.25 hedge funds with bullish positions and the average amount invested in these stocks was $180 million. That figure was $264 million in CLGX’s case. Inogen Inc (NASDAQ:INGN) is the most popular stock in this table. On the other hand Akcea Therapeutics, Inc. (NASDAQ:AKCA) is the least popular one with only 6 bullish hedge fund positions. Corelogic Inc (NYSE:CLGX) is not the most popular stock in this group but hedge fund interest is still above average. Our calculations showed that top 15 most popular stocks) among hedge funds returned 24.2% through April 22nd and outperformed the S&P 500 ETF (SPY) by more than 7 percentage points. Hedge funds were also right about betting on CLGX as the stock returned 25.6% and outperformed the market by an even larger margin. Hedge funds were rewarded for their relative bullishness.