Did Hedge Funds Drop The Ball On Constellium NV (CSTM) ?

Is Constellium NV (NYSE:CSTM) a good bet right now? We like to analyze hedge fund sentiment before doing days of in-depth research. We do so because hedge funds and other elite investors have numerous Ivy League graduates, expert network advisers, and supply chain tipsters working or consulting for them. There is not a shortage of news stories covering failed hedge fund investments and it is a fact that hedge funds’ picks don’t beat the market 100% of the time, but their consensus picks have historically done very well and have outperformed the market after adjusting for risk.

Is Constellium NV (NYSE:CSTM) a splendid stock to buy now? Hedge funds are becoming less confident. The number of long hedge fund positions decreased by 3 recently. Our calculations also showed that CSTM isn’t among the 30 most popular stocks among hedge funds. CSTM was in 32 hedge funds’ portfolios at the end of December. There were 35 hedge funds in our database with CSTM positions at the end of the previous quarter.

What does the smart money think about Constellium NV (NYSE:CSTM)?

At Q4’s end, a total of 32 of the hedge funds tracked by Insider Monkey were bullish on this stock, a change of -9% from one quarter earlier. Below, you can check out the change in hedge fund sentiment towards CSTM over the last 14 quarters. With the smart money’s capital changing hands, there exists an “upper tier” of key hedge fund managers who were adding to their stakes meaningfully (or already accumulated large positions). 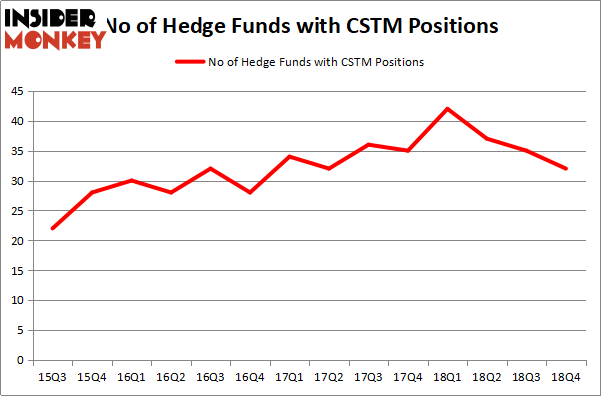 The largest stake in Constellium NV (NYSE:CSTM) was held by Park West Asset Management, which reported holding $22.3 million worth of stock at the end of December. It was followed by Nut Tree Capital with a $16.1 million position. Other investors bullish on the company included Kingdon Capital, Rubric Capital Management, and Millennium Management.

Seeing as Constellium NV (NYSE:CSTM) has witnessed declining sentiment from the aggregate hedge fund industry, it’s easy to see that there was a specific group of money managers who sold off their full holdings by the end of the third quarter. Intriguingly, Steven Tananbaum’s GoldenTree Asset Management cut the largest investment of the “upper crust” of funds watched by Insider Monkey, comprising about $21.1 million in stock. Principal Global Investors’s fund, Columbus Circle Investors, also dropped its stock, about $19.7 million worth. These moves are interesting, as total hedge fund interest fell by 3 funds by the end of the third quarter.

As you can see these stocks had an average of 8.25 hedge funds with bullish positions and the average amount invested in these stocks was $94 million. That figure was $234 million in CSTM’s case. TrueCar, Inc. (NASDAQ:TRUE) is the most popular stock in this table. On the other hand Chase Corporation (NYSEAMEX:CCF) is the least popular one with only 5 bullish hedge fund positions. Compared to these stocks Constellium NV (NYSE:CSTM) is more popular among hedge funds. Our calculations showed that top 15 most popular stocks) among hedge funds returned 24.2% through April 22nd and outperformed the S&P 500 ETF (SPY) by more than 7 percentage points. Hedge funds were also right about betting on CSTM as the stock returned 36.2% and outperformed the market by an even larger margin. Hedge funds were clearly right about piling into this stock relative to other stocks with similar market capitalizations.