While the market driven by short-term sentiment influenced by uncertainty regarding the future of the interest rate environment in the US, declining oil prices and the trade war with China, many smart money investors kept their optimism regarding the current bull run in the fourth quarter, while still hedging many of their long positions. However, as we know, big investors usually buy stocks with strong fundamentals, which is why we believe we can profit from imitating them. In this article, we are going to take a look at the smart money sentiment surrounding Cohen & Steers, Inc. (NYSE:CNS).

Cohen & Steers, Inc. (NYSE:CNS) has experienced a decrease in activity from the world’s largest hedge funds lately. CNS was in 8 hedge funds’ portfolios at the end of the fourth quarter of 2018. There were 9 hedge funds in our database with CNS holdings at the end of the previous quarter. Our calculations also showed that cns isn’t among the 30 most popular stocks among hedge funds.

What does the smart money think about Cohen & Steers, Inc. (NYSE:CNS)?

At the end of the fourth quarter, a total of 8 of the hedge funds tracked by Insider Monkey were long this stock, a change of -11% from the second quarter of 2018. By comparison, 15 hedge funds held shares or bullish call options in CNS a year ago. With hedge funds’ sentiment swirling, there exists a select group of key hedge fund managers who were increasing their holdings considerably (or already accumulated large positions). 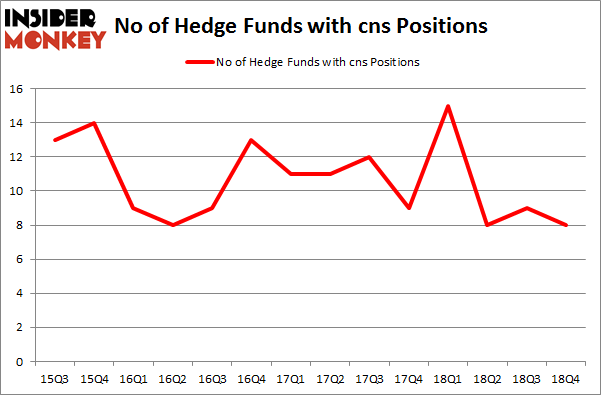 The largest stake in Cohen & Steers, Inc. (NYSE:CNS) was held by GAMCO Investors, which reported holding $30.1 million worth of stock at the end of December. It was followed by Royce & Associates with a $11.4 million position. Other investors bullish on the company included Renaissance Technologies, Millennium Management, and AQR Capital Management.

Judging by the fact that Cohen & Steers, Inc. (NYSE:CNS) has faced falling interest from the aggregate hedge fund industry, it’s safe to say that there were a few money managers that slashed their entire stakes last quarter. Intriguingly, Ken Griffin’s Citadel Investment Group cut the largest stake of the “upper crust” of funds monitored by Insider Monkey, worth close to $1.2 million in stock. Brandon Haley’s fund, Holocene Advisors, also dumped its stock, about $0.4 million worth. These transactions are important to note, as aggregate hedge fund interest dropped by 1 funds last quarter.

As you can see these stocks had an average of 18.75 hedge funds with bullish positions and the average amount invested in these stocks was $126 million. That figure was $47 million in CNS’s case. Avaya Holdings Corp. (NYSE:AVYA) is the most popular stock in this table. On the other hand Forward Air Corporation (NASDAQ:FWRD) is the least popular one with only 11 bullish hedge fund positions. Compared to these stocks Cohen & Steers, Inc. (NYSE:CNS) is even less popular than FWRD. Hedge funds clearly dropped the ball on CNS as the stock delivered strong returns, though hedge funds’ consensus picks still generated respectable returns. Our calculations showed that top 15 most popular stocks) among hedge funds returned 24.2% through April 22nd and outperformed the S&P 500 ETF (SPY) by more than 7 percentage points. A small number of hedge funds were also right about betting on CNS as the stock returned 41.7% and outperformed the market by an even larger margin.