The elite funds run by legendary investors such as David Tepper and Dan Loeb make hundreds of millions of dollars for themselves and their investors by spending enormous resources doing research on small cap stocks that big investment banks don’t follow. Because of their pay structures, they have strong incentives to do the research necessary to beat the market. That’s why we pay close attention to what they think in small cap stocks. In this article, we take a closer look at Coca-Cola Consolidated, Inc. (NASDAQ:COKE) from the perspective of those elite funds.

Coca-Cola Consolidated, Inc. (NASDAQ:COKE) was in 7 hedge funds’ portfolios at the end of the fourth quarter of 2018. COKE investors should be aware of a decrease in enthusiasm from smart money of late. There were 9 hedge funds in our database with COKE positions at the end of the previous quarter. Our calculations also showed that coke isn’t among the 30 most popular stocks among hedge funds.

What does the smart money think about Coca-Cola Consolidated, Inc. (NASDAQ:COKE)?

At Q4’s end, a total of 7 of the hedge funds tracked by Insider Monkey were bullish on this stock, a change of -22% from the second quarter of 2018. By comparison, 10 hedge funds held shares or bullish call options in COKE a year ago. With the smart money’s positions undergoing their usual ebb and flow, there exists a select group of noteworthy hedge fund managers who were boosting their stakes substantially (or already accumulated large positions). 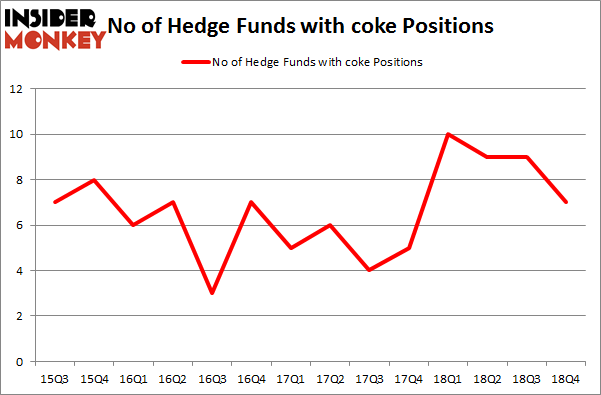 The largest stake in Coca-Cola Consolidated, Inc. (NASDAQ:COKE) was held by PDT Partners, which reported holding $2.2 million worth of stock at the end of December. It was followed by AQR Capital Management with a $0.9 million position. Other investors bullish on the company included Renaissance Technologies, Citadel Investment Group, and Quantinno Capital.

Seeing as Coca-Cola Consolidated, Inc. (NASDAQ:COKE) has faced a decline in interest from hedge fund managers, it’s safe to say that there exists a select few funds who were dropping their entire stakes heading into Q3. Interestingly, Brandon Haley’s Holocene Advisors sold off the biggest stake of the “upper crust” of funds watched by Insider Monkey, valued at about $0.7 million in stock. Michael Platt and William Reeves’s fund, BlueCrest Capital Mgmt., also said goodbye to its stock, about $0.5 million worth. These transactions are intriguing to say the least, as aggregate hedge fund interest fell by 2 funds heading into Q3.

As you can see these stocks had an average of 15.5 hedge funds with bullish positions and the average amount invested in these stocks was $125 million. That figure was $5 million in COKE’s case. The Hain Celestial Group, Inc. (NASDAQ:HAIN) is the most popular stock in this table. On the other hand LTC Properties Inc (NYSE:LTC) is the least popular one with only 12 bullish hedge fund positions. Compared to these stocks Coca-Cola Consolidated, Inc. (NASDAQ:COKE) is even less popular than LTC. Hedge funds clearly dropped the ball on COKE as the stock delivered strong returns, though hedge funds’ consensus picks still generated respectable returns. Our calculations showed that top 15 most popular stocks) among hedge funds returned 24.2% through April 22nd and outperformed the S&P 500 ETF (SPY) by more than 7 percentage points. A small number of hedge funds were also right about betting on COKE as the stock returned 71.6% and outperformed the market by an even larger margin.