We at Insider Monkey have gone over 700 13F filings that hedge funds and prominent investors are required to file by the SEC. The 13F filings show the funds’ and investors’ portfolio positions as of December 31st. In this article we look at what those investors think of China Yuchai International Limited (NYSE:CYD).

China Yuchai International Limited (NYSE:CYD) shares haven’t seen a lot of action during the third quarter. Overall, hedge fund sentiment was unchanged. The stock was in 8 hedge funds’ portfolios at the end of the fourth quarter of 2018. At the end of this article we will also compare CYD to other stocks including Ennis, Inc. (NYSE:EBF), OrthoPediatrics Corp. (NASDAQ:KIDS), and Eidos Therapeutics, Inc. (NASDAQ:EIDX) to get a better sense of its popularity.

What does the smart money think about China Yuchai International Limited (NYSE:CYD)? 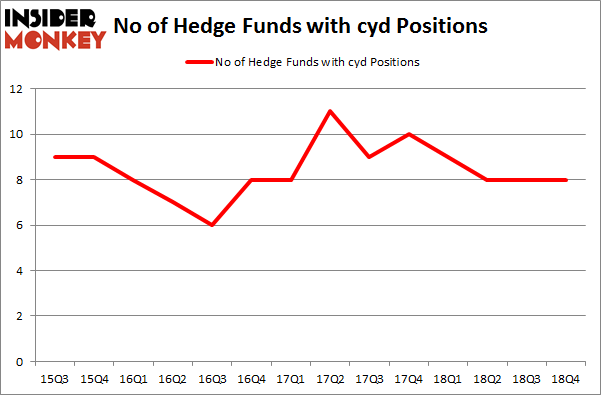 Among these funds, Shah Capital Management held the most valuable stake in China Yuchai International Limited (NYSE:CYD), which was worth $42.3 million at the end of the fourth quarter. On the second spot was Renaissance Technologies which amassed $4.5 million worth of shares. Moreover, Sensato Capital Management, Arrowstreet Capital, and Two Sigma Advisors were also bullish on China Yuchai International Limited (NYSE:CYD), allocating a large percentage of their portfolios to this stock.

Since China Yuchai International Limited (NYSE:CYD) has experienced a decline in interest from the smart money, it’s easy to see that there was a specific group of funds that slashed their positions entirely by the end of the third quarter. Intriguingly, J. Alan Reid, Jr.’s Forward Management sold off the largest position of all the hedgies monitored by Insider Monkey, comprising an estimated $1.9 million in stock. Jeffrey Talpins’s fund, Element Capital Management, also sold off its stock, about $0.2 million worth. These moves are intriguing to say the least, as aggregate hedge fund interest stayed the same (this is a bearish signal in our experience).

As you can see these stocks had an average of 7.25 hedge funds with bullish positions and the average amount invested in these stocks was $54 million. That figure was $55 million in CYD’s case. Ennis, Inc. (NYSE:EBF) is the most popular stock in this table. On the other hand Avianca Holdings SA (NYSE:AVH) is the least popular one with only 4 bullish hedge fund positions. China Yuchai International Limited (NYSE:CYD) is not the most popular stock in this group but hedge fund interest is still above average. Our calculations showed that top 15 most popular stocks) among hedge funds returned 24.2% through April 22nd and outperformed the S&P 500 ETF (SPY) by more than 7 percentage points. Hedge funds were also right about betting on CYD as the stock returned 42.3% and outperformed the market by an even larger margin. Hedge funds were rewarded for their relative bullishness.