Hedge fund interest in Cannae Holdings, Inc. (NYSE:CNNE) shares was flat at the end of last quarter. This is usually a negative indicator. At the end of this article we will also compare CNNE to other stocks including TPG RE Finance Trust, Inc. (NYSE:TRTX), Berkshire Hills Bancorp, Inc. (NYSE:BHLB), and Casella Waste Systems Inc. (NASDAQ:CWST) to get a better sense of its popularity.

At the end of the fourth quarter, a total of 23 of the hedge funds tracked by Insider Monkey were long this stock, a change of 0% from the previous quarter. Below, you can check out the change in hedge fund sentiment towards CNNE over the last 14 quarters. So, let’s examine which hedge funds were among the top holders of the stock and which hedge funds were making big moves. 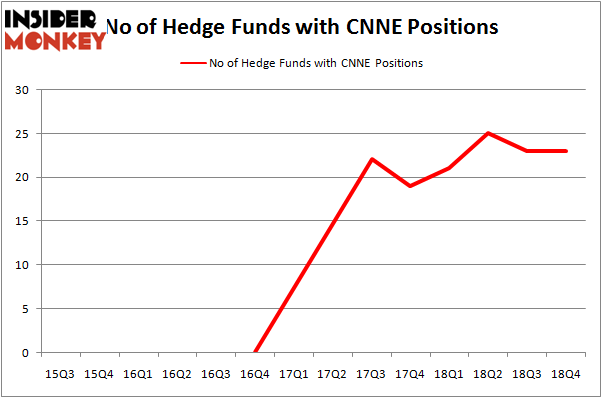 More specifically, Nitorum Capital was the largest shareholder of Cannae Holdings, Inc. (NYSE:CNNE), with a stake worth $64 million reported as of the end of December. Trailing Nitorum Capital was Ancora Advisors, which amassed a stake valued at $17.6 million. Governors Lane, Lomas Capital Management, and Renaissance Technologies were also very fond of the stock, giving the stock large weights in their portfolios.

Because Cannae Holdings, Inc. (NYSE:CNNE) has witnessed a decline in interest from the smart money, it’s easy to see that there is a sect of hedgies that slashed their positions entirely last quarter. It’s worth mentioning that Steve Cohen’s Point72 Asset Management said goodbye to the biggest stake of the 700 funds monitored by Insider Monkey, totaling an estimated $4.7 million in stock, and Peter Seuss’s Prana Capital Management was right behind this move, as the fund cut about $2.2 million worth. These transactions are intriguing to say the least, as total hedge fund interest stayed the same (this is a bearish signal in our experience).

As you can see these stocks had an average of 13.75 hedge funds with bullish positions and the average amount invested in these stocks was $61 million. That figure was $180 million in CNNE’s case. Casella Waste Systems Inc. (NASDAQ:CWST) is the most popular stock in this table. On the other hand TPG RE Finance Trust, Inc. (NYSE:TRTX) is the least popular one with only 9 bullish hedge fund positions. Compared to these stocks Cannae Holdings, Inc. (NYSE:CNNE) is more popular among hedge funds. Our calculations showed that top 15 most popular stocks) among hedge funds returned 24.2% through April 22nd and outperformed the S&P 500 ETF (SPY) by more than 7 percentage points. Hedge funds were also right about betting on CNNE as the stock returned 46.5% and outperformed the market by an even larger margin. Hedge funds were clearly right about piling into this stock relative to other stocks with similar market capitalizations.