Before we spend countless hours researching a company, we’d like to analyze what insiders, hedge funds and billionaire investors think of the stock first. We would like to do so because our research has shown that the elite investors’ consensus returns have been exceptional. In the following paragraphs, we find out what the billionaire investors and hedge funds think of Callon Petroleum Company (NYSE:CPE).

Callon Petroleum Company (NYSE:CPE) shareholders have witnessed a decrease in hedge fund sentiment in recent months. CPE was in 22 hedge funds’ portfolios at the end of December. There were 26 hedge funds in our database with CPE positions at the end of the previous quarter. Our calculations also showed that CPE isn’t among the 30 most popular stocks among hedge funds.

What does the smart money think about Callon Petroleum Company (NYSE:CPE)?

At Q4’s end, a total of 22 of the hedge funds tracked by Insider Monkey were bullish on this stock, a change of -15% from one quarter earlier. Below, you can check out the change in hedge fund sentiment towards CPE over the last 14 quarters. With hedgies’ positions undergoing their usual ebb and flow, there exists a select group of noteworthy hedge fund managers who were increasing their holdings substantially (or already accumulated large positions). 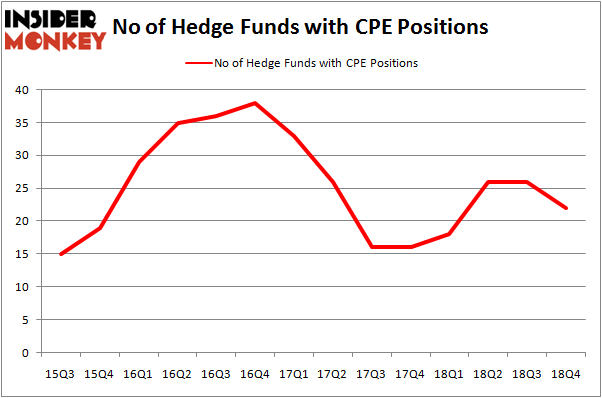 Among these funds, Luminus Management held the most valuable stake in Callon Petroleum Company (NYSE:CPE), which was worth $55.2 million at the end of the fourth quarter. On the second spot was Cardinal Capital which amassed $33.5 million worth of shares. Moreover, Fisher Asset Management, Adage Capital Management, and Millennium Management were also bullish on Callon Petroleum Company (NYSE:CPE), allocating a large percentage of their portfolios to this stock.

Seeing as Callon Petroleum Company (NYSE:CPE) has witnessed bearish sentiment from the aggregate hedge fund industry, it’s safe to say that there lies a certain “tier” of funds who sold off their positions entirely in the third quarter. Interestingly, Alec Litowitz and Ross Laser’s Magnetar Capital said goodbye to the largest investment of the 700 funds tracked by Insider Monkey, totaling an estimated $15.7 million in stock. Andrew Feldstein and Stephen Siderow’s fund, Blue Mountain Capital, also said goodbye to its stock, about $7.9 million worth. These bearish behaviors are interesting, as aggregate hedge fund interest dropped by 4 funds in the third quarter.

Let’s go over hedge fund activity in other stocks – not necessarily in the same industry as Callon Petroleum Company (NYSE:CPE) but similarly valued. We will take a look at Spark Therapeutics Inc (NASDAQ:ONCE), FGL Holdings (NYSE:FG), Rapid7 Inc (NASDAQ:RPD), and Cars.com Inc. (NYSE:CARS). All of these stocks’ market caps are closest to CPE’s market cap.

As you can see these stocks had an average of 21.5 hedge funds with bullish positions and the average amount invested in these stocks was $275 million. That figure was $175 million in CPE’s case. FGL Holdings (NYSE:FG) is the most popular stock in this table. On the other hand Spark Therapeutics Inc (NASDAQ:ONCE) is the least popular one with only 15 bullish hedge fund positions. Callon Petroleum Company (NYSE:CPE) is not the most popular stock in this group but hedge fund interest is still above average. Our calculations showed that top 15 most popular stocks) among hedge funds returned 24.2% through April 22nd and outperformed the S&P 500 ETF (SPY) by more than 7 percentage points. Hedge funds were also right about betting on CPE as the stock returned 29.6% and outperformed the market by an even larger margin. Hedge funds were rewarded for their relative bullishness.