Boyd Gaming Corporation (NYSE:BYD) investors should pay attention to a decrease in activity from the world’s largest hedge funds in recent months. BYD was in 30 hedge funds’ portfolios at the end of December. There were 33 hedge funds in our database with BYD holdings at the end of the previous quarter. Our calculations also showed that BYD isn’t among the 30 most popular stocks among hedge funds. 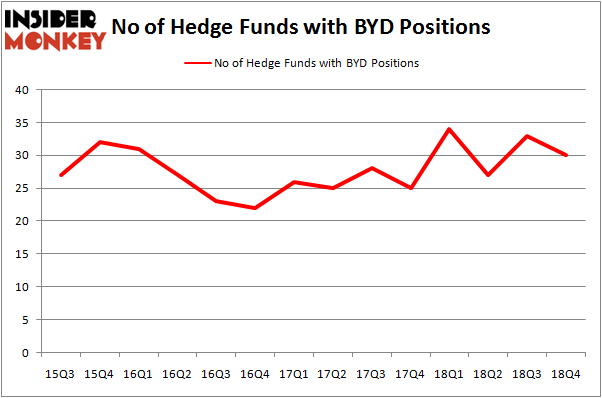 Among these funds, PAR Capital Management held the most valuable stake in Boyd Gaming Corporation (NYSE:BYD), which was worth $120.8 million at the end of the third quarter. On the second spot was Valinor Management LLC which amassed $56.1 million worth of shares. Moreover, Highline Capital Management, GAMCO Investors, and Millennium Management were also bullish on Boyd Gaming Corporation (NYSE:BYD), allocating a large percentage of their portfolios to this stock.

Since Boyd Gaming Corporation (NYSE:BYD) has faced falling interest from the aggregate hedge fund industry, it’s safe to say that there were a few fund managers that elected to cut their full holdings by the end of the third quarter. At the top of the heap, David Tepper’s Appaloosa Management LP dumped the largest position of the 700 funds watched by Insider Monkey, valued at about $45.9 million in stock. Alexander Mitchell’s fund, Scopus Asset Management, also dropped its stock, about $36.6 million worth. These bearish behaviors are important to note, as aggregate hedge fund interest fell by 3 funds by the end of the third quarter.

As you can see these stocks had an average of 16.75 hedge funds with bullish positions and the average amount invested in these stocks was $467 million. That figure was $461 million in BYD’s case. Genomic Health, Inc. (NASDAQ:GHDX) is the most popular stock in this table. On the other hand First Financial Bancorp (NASDAQ:FFBC) is the least popular one with only 6 bullish hedge fund positions. Compared to these stocks Boyd Gaming Corporation (NYSE:BYD) is more popular among hedge funds. Our calculations showed that top 15 most popular stocks) among hedge funds returned 24.2% through April 22nd and outperformed the S&P 500 ETF (SPY) by more than 7 percentage points. Hedge funds were also right about betting on BYD as the stock returned 43.8% and outperformed the market by an even larger margin. Hedge funds were clearly right about piling into this stock relative to other stocks with similar market capitalizations.