Russell 2000 ETF (IWM) lagged the larger S&P 500 ETF (SPY) by more than 10 percentage points since the end of the third quarter of 2018 as investors first worried over the possible ramifications of rising interest rates and the escalation of the trade war with China. The hedge funds and institutional investors we track typically invest more in smaller-cap stocks than an average investor (i.e. only about 60% S&P 500 constituents were among the 500 most popular stocks among hedge funds), and we have seen data that shows those funds paring back their overall exposure. Those funds cutting positions in small-caps is one reason why volatility has increased. In the following paragraphs, we take a closer look at what hedge funds and prominent investors think of BioDelivery Sciences International, Inc. (NASDAQ:BDSI) and see how the stock is affected by the recent hedge fund activity.

BioDelivery Sciences International, Inc. (NASDAQ:BDSI) shareholders have witnessed an increase in enthusiasm from smart money recently. Our calculations also showed that BDSI isn’t among the 30 most popular stocks among hedge funds (click for Q3 rankings and see the video below for Q2 rankings).

We leave no stone unturned when looking for the next great investment idea. For example Europe is set to become the world’s largest cannabis market, so we check out this European marijuana stock pitch. One of the most bullish analysts in America just put his money where his mouth is. He says, “I’m investing more today than I did back in early 2009.” So we check out his pitch. We read hedge fund investor letters and listen to stock pitches at hedge fund conferences. We also rely on the best performing hedge funds‘ buy/sell signals. We’re going to review the recent hedge fund action encompassing BioDelivery Sciences International, Inc. (NASDAQ:BDSI).

At the end of the third quarter, a total of 18 of the hedge funds tracked by Insider Monkey were bullish on this stock, a change of 13% from the second quarter of 2019. Below, you can check out the change in hedge fund sentiment towards BDSI over the last 17 quarters. With hedgies’ capital changing hands, there exists an “upper tier” of notable hedge fund managers who were increasing their holdings considerably (or already accumulated large positions). 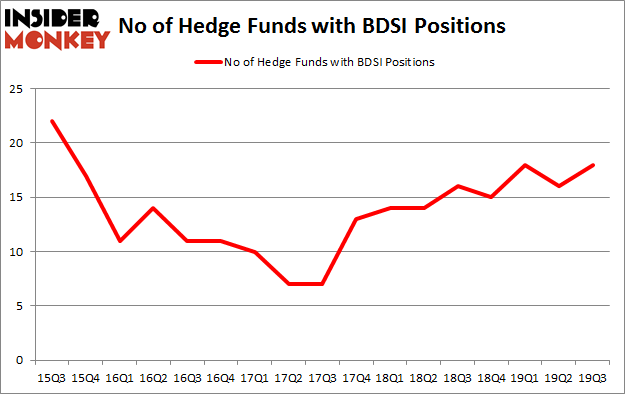 According to Insider Monkey’s hedge fund database, venBio Select Advisor, managed by Behzad Aghazadeh, holds the number one position in BioDelivery Sciences International, Inc. (NASDAQ:BDSI). venBio Select Advisor has a $31.3 million position in the stock, comprising 1.3% of its 13F portfolio. The second most bullish fund manager is Nantahala Capital Management, led by Wilmot B. Harkey and Daniel Mack, holding a $20.4 million position; 0.8% of its 13F portfolio is allocated to the stock. Remaining peers with similar optimism comprise Kevin Kotler’s Broadfin Capital, David Rosen’s Rubric Capital Management and Phill Gross and Robert Atchinson’s Adage Capital Management. In terms of the portfolio weights assigned to each position Broadfin Capital allocated the biggest weight to BioDelivery Sciences International, Inc. (NASDAQ:BDSI), around 3.35% of its 13F portfolio. venBio Select Advisor is also relatively very bullish on the stock, earmarking 1.3 percent of its 13F equity portfolio to BDSI.

With a general bullishness amongst the heavyweights, key hedge funds have been driving this bullishness. Winton Capital Management, managed by David Harding, created the most outsized position in BioDelivery Sciences International, Inc. (NASDAQ:BDSI). Winton Capital Management had $1.5 million invested in the company at the end of the quarter. Cliff Asness’s AQR Capital Management also initiated a $0.2 million position during the quarter. The following funds were also among the new BDSI investors: Peter Algert and Kevin Coldiron’s Algert Coldiron Investors and Andre F. Perold’s HighVista Strategies.

As you can see these stocks had an average of 4.5 hedge funds with bullish positions and the average amount invested in these stocks was $12 million. That figure was $109 million in BDSI’s case. Rite Aid Corporation (NYSE:RAD) is the most popular stock in this table. On the other hand EVI Industries, Inc. (NYSE:EVI) is the least popular one with only 2 bullish hedge fund positions. Compared to these stocks BioDelivery Sciences International, Inc. (NASDAQ:BDSI) is more popular among hedge funds. Our calculations showed that top 20 most popular stocks among hedge funds returned 37.4% in 2019 through the end of November and outperformed the S&P 500 ETF (SPY) by 9.9 percentage points. Hedge funds were also right about betting on BDSI as the stock returned 62% during the first two months of Q4 and outperformed the market by an even larger margin. Hedge funds were clearly right about piling into this stock relative to other stocks with similar market capitalizations.