Before we spend days researching a stock idea we’d like to take a look at how hedge funds and billionaire investors recently traded that stock. S&P 500 Index ETF (SPY) lost 13.5% in the fourth quarter. Seven out of 11 industry groups in the S&P 500 Index were down more than 20% from their 52-week highs at the trough of the stock market crash. The average return of a randomly picked stock in the index was even worse. This means you (or a monkey throwing a dart) have less than an even chance of beating the market by randomly picking a stock. On the other hand, the top 15 most popular S&P 500 stocks among hedge funds not only recouped their Q4 losses but also outperformed the index by more than 3 percentage points. In this article, we will take a look at what hedge funds think about Avis Budget Group Inc. (NASDAQ:CAR).

Avis Budget Group Inc. (NASDAQ:CAR) shares haven’t seen a lot of action during the third quarter. Overall, hedge fund sentiment was unchanged. The stock was in 29 hedge funds’ portfolios at the end of December. The level and the change in hedge fund popularity aren’t the only variables you need to analyze to decipher hedge funds’ perspectives. A stock may witness a boost in popularity but it may still be less popular than similarly priced stocks. That’s why at the end of this article we will examine companies such as SM Energy Company (NYSE:SM), Supernus Pharmaceuticals Inc (NASDAQ:SUPN), and Crocs, Inc. (NASDAQ:CROX) to gather more data points.

To the average investor there are plenty of signals stock market investors employ to size up publicly traded companies. Some of the best signals are hedge fund and insider trading interest. We have shown that, historically, those who follow the top picks of the top money managers can beat their index-focused peers by a significant amount (see the details here). 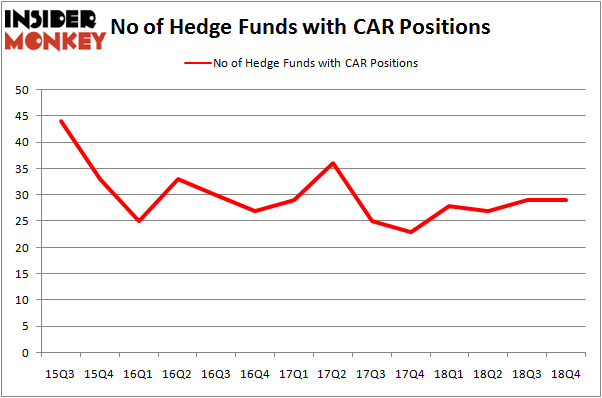 Judging by the fact that Avis Budget Group Inc. (NASDAQ:CAR) has experienced bearish sentiment from the entirety of the hedge funds we track, we can see that there exists a select few hedge funds that slashed their entire stakes in the third quarter. Intriguingly, Steven Boyd’s Armistice Capital dropped the biggest position of the 700 funds followed by Insider Monkey, totaling about $32.1 million in stock, and Anand Parekh’s Alyeska Investment Group was right behind this move, as the fund said goodbye to about $5.2 million worth. These transactions are intriguing to say the least, as aggregate hedge fund interest stayed the same (this is a bearish signal in our experience).

As you can see these stocks had an average of 20.25 hedge funds with bullish positions and the average amount invested in these stocks was $287 million. That figure was $608 million in CAR’s case. Crocs, Inc. (NASDAQ:CROX) is the most popular stock in this table. On the other hand Supernus Pharmaceuticals Inc (NASDAQ:SUPN) is the least popular one with only 15 bullish hedge fund positions. Compared to these stocks Avis Budget Group Inc. (NASDAQ:CAR) is more popular among hedge funds. Our calculations showed that top 15 most popular stocks) among hedge funds returned 24.2% through April 22nd and outperformed the S&P 500 ETF (SPY) by more than 7 percentage points. Hedge funds were also right about betting on CAR as the stock returned 59.3% and outperformed the market by an even larger margin. Hedge funds were clearly right about piling into this stock relative to other stocks with similar market capitalizations.