Out of thousands of stocks that are currently traded on the market, it is difficult to identify those that will really generate strong returns. Hedge funds and institutional investors spend millions of dollars on analysts with MBAs and PhDs, who are industry experts and well connected to other industry and media insiders on top of that. Individual investors can piggyback the hedge funds employing these talents and can benefit from their vast resources and knowledge in that way. We analyze quarterly 13F filings of nearly 750 hedge funds and, by looking at the smart money sentiment that surrounds a stock, we can determine whether it has the potential to beat the market over the long-term. Therefore, let’s take a closer look at what smart money thinks about Atmos Energy Corporation (NYSE:ATO).

Atmos Energy Corporation (NYSE:ATO) was in 14 hedge funds’ portfolios at the end of the second quarter of 2019. ATO shareholders have witnessed a decrease in hedge fund sentiment recently. There were 20 hedge funds in our database with ATO holdings at the end of the previous quarter. Our calculations also showed that ATO isn’t among the 30 most popular stocks among hedge funds (view the video below). 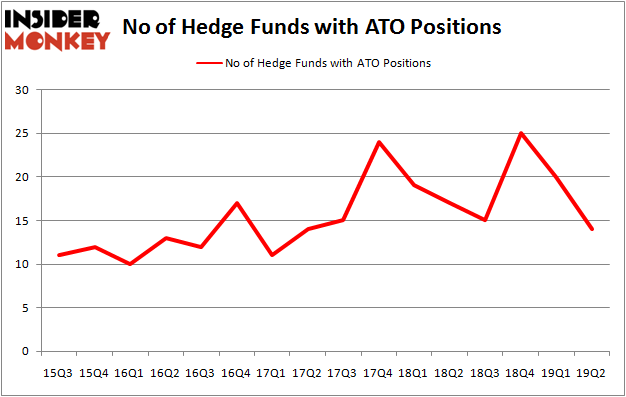 Unlike some fund managers who are betting on Dow reaching 40000 in a year, our long-short investment strategy doesn’t rely on bull markets to deliver double digit returns. We only rely on hedge fund buy/sell signals. We’re going to view the fresh hedge fund action regarding Atmos Energy Corporation (NYSE:ATO).

What have hedge funds been doing with Atmos Energy Corporation (NYSE:ATO)?

At the end of the second quarter, a total of 14 of the hedge funds tracked by Insider Monkey held long positions in this stock, a change of -30% from one quarter earlier. By comparison, 17 hedge funds held shares or bullish call options in ATO a year ago. With hedgies’ sentiment swirling, there exists a select group of key hedge fund managers who were adding to their holdings considerably (or already accumulated large positions).

More specifically, Luminus Management was the largest shareholder of Atmos Energy Corporation (NYSE:ATO), with a stake worth $94.3 million reported as of the end of March. Trailing Luminus Management was Citadel Investment Group, which amassed a stake valued at $86.1 million. AQR Capital Management, Carlson Capital, and Renaissance Technologies were also very fond of the stock, giving the stock large weights in their portfolios.

Seeing as Atmos Energy Corporation (NYSE:ATO) has witnessed a decline in interest from the smart money, it’s easy to see that there lies a certain “tier” of hedge funds who were dropping their positions entirely by the end of the second quarter. At the top of the heap, Peter J. Hark’s Shelter Harbor Advisors cut the largest investment of the “upper crust” of funds watched by Insider Monkey, totaling close to $7.7 million in stock. Matthew Tewksbury’s fund, Stevens Capital Management, also cut its stock, about $3.9 million worth. These bearish behaviors are intriguing to say the least, as total hedge fund interest fell by 6 funds by the end of the second quarter.

As you can see these stocks had an average of 30.75 hedge funds with bullish positions and the average amount invested in these stocks was $883 million. That figure was $398 million in ATO’s case. Ally Financial Inc (NYSE:ALLY) is the most popular stock in this table. On the other hand Kansas City Southern (NYSE:KSU) is the least popular one with only 26 bullish hedge fund positions. Compared to these stocks Atmos Energy Corporation (NYSE:ATO) is even less popular than KSU. Hedge funds clearly dropped the ball on ATO as the stock delivered strong returns, though hedge funds’ consensus picks still generated respectable returns. Our calculations showed that top 20 most popular stocks among hedge funds returned 24.4% in 2019 through September 30th and outperformed the S&P 500 ETF (SPY) by 4 percentage points. A small number of hedge funds were also right about betting on ATO as the stock returned 8.4% during the third quarter and outperformed the market by an even larger margin.