The fourth quarter was a rough one for most investors, as fears of a rising interest rate environment in the U.S, a trade war with China, and a more or less stagnant Europe, weighed heavily on the minds of investors. Both the S&P 500 and Russell 2000 sank as a result, with the Russell 2000, which is composed of smaller companies, being hit especially hard. This was primarily due to hedge funds, which are big supporters of small-cap stocks, pulling some of their capital out of the volatile markets during this time. Let’s look at how this market volatility affected the sentiment of hedge funds towards Astec Industries, Inc. (NASDAQ:ASTE), and what that likely means for the prospects of the company and its stock.

Hedge fund interest in Astec Industries, Inc. (NASDAQ:ASTE) shares was flat at the end of last quarter. This is usually a negative indicator. The level and the change in hedge fund popularity aren’t the only variables you need to analyze to decipher hedge funds’ perspectives. A stock may witness a boost in popularity but it may still be less popular than similarly priced stocks. That’s why at the end of this article we will examine companies such as EMC Insurance Group Inc. (NASDAQ:EMCI), Unity Biotechnology, Inc. (NASDAQ:UBX), and Banco Latinoamericano de Comercio Exterior, S.A. (NYSE:BLX) to gather more data points.

To the average investor there are numerous formulas shareholders employ to analyze stocks. A duo of the most innovative formulas are hedge fund and insider trading signals. Our researchers have shown that, historically, those who follow the top picks of the top fund managers can outpace the broader indices by a solid amount (see the details here).

Heading into the first quarter of 2019, a total of 10 of the hedge funds tracked by Insider Monkey were long this stock, a change of 0% from the previous quarter. Below, you can check out the change in hedge fund sentiment towards ASTE over the last 14 quarters. With hedge funds’ sentiment swirling, there exists an “upper tier” of key hedge fund managers who were increasing their holdings meaningfully (or already accumulated large positions). 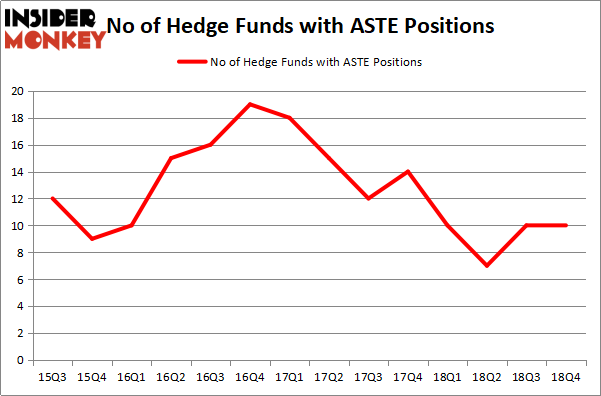 The largest stake in Astec Industries, Inc. (NASDAQ:ASTE) was held by GAMCO Investors, which reported holding $37.3 million worth of stock at the end of December. It was followed by Royce & Associates with a $16.3 million position. Other investors bullish on the company included Adage Capital Management, Citadel Investment Group, and Engaged Capital.

Judging by the fact that Astec Industries, Inc. (NASDAQ:ASTE) has experienced a decline in interest from hedge fund managers, it’s safe to say that there is a sect of hedge funds that decided to sell off their entire stakes by the end of the third quarter. Interestingly, Richard McGuire’s Marcato Capital Management sold off the biggest investment of the 700 funds followed by Insider Monkey, valued at close to $26.5 million in stock. Cliff Asness’s fund, AQR Capital Management, also said goodbye to its stock, about $5.3 million worth. These bearish behaviors are important to note, as aggregate hedge fund interest stayed the same (this is a bearish signal in our experience).

As you can see these stocks had an average of 6.5 hedge funds with bullish positions and the average amount invested in these stocks was $30 million. That figure was $76 million in ASTE’s case. Tailored Brands, Inc. (NYSE:TLRD) is the most popular stock in this table. On the other hand Banco Latinoamericano de Comercio Exterior, S.A. (NYSE:BLX) is the least popular one with only 1 bullish hedge fund positions. Astec Industries, Inc. (NASDAQ:ASTE) is not the most popular stock in this group but hedge fund interest is still above average. Our calculations showed that top 15 most popular stocks) among hedge funds returned 24.2% through April 22nd and outperformed the S&P 500 ETF (SPY) by more than 7 percentage points. Hedge funds were also right about betting on ASTE as the stock returned 41.8% and outperformed the market by an even larger margin. Hedge funds were rewarded for their relative bullishness.