Did Hedge Funds Drop The Ball On argenx SE (ARGX) ?

argenx SE (NASDAQ:ARGX) has seen a decrease in activity from the world’s largest hedge funds of late. Our calculations also showed that argx isn’t among the 30 most popular stocks among hedge funds.

At Q4’s end, a total of 27 of the hedge funds tracked by Insider Monkey held long positions in this stock, a change of -21% from the previous quarter. The graph below displays the number of hedge funds with bullish position in ARGX over the last 14 quarters. With the smart money’s capital changing hands, there exists a select group of notable hedge fund managers who were upping their stakes significantly (or already accumulated large positions). 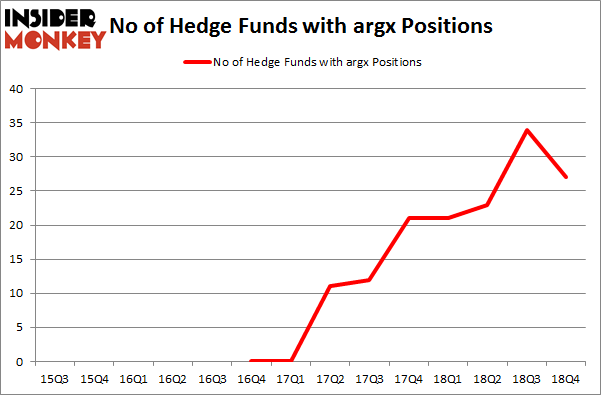 More specifically, Baker Bros. Advisors was the largest shareholder of argenx SE (NASDAQ:ARGX), with a stake worth $97.9 million reported as of the end of September. Trailing Baker Bros. Advisors was Redmile Group, which amassed a stake valued at $92.3 million. venBio Select Advisor, EcoR1 Capital, and OrbiMed Advisors were also very fond of the stock, giving the stock large weights in their portfolios.

Since argenx SE (NASDAQ:ARGX) has witnessed bearish sentiment from the smart money, it’s easy to see that there was a specific group of hedge funds who were dropping their entire stakes last quarter. Interestingly, Phill Gross and Robert Atchinson’s Adage Capital Management cut the biggest investment of the “upper crust” of funds followed by Insider Monkey, comprising close to $77.1 million in stock, and Benjamin A. Smith’s Laurion Capital Management was right behind this move, as the fund dumped about $10.7 million worth. These moves are important to note, as total hedge fund interest fell by 7 funds last quarter.

Let’s now take a look at hedge fund activity in other stocks – not necessarily in the same industry as argenx SE (NASDAQ:ARGX) but similarly valued. These stocks are Zynga Inc (NASDAQ:ZNGA), EnerSys (NYSE:ENS), Olin Corporation (NYSE:OLN), and Essent Group Ltd (NYSE:ESNT). This group of stocks’ market caps are closest to ARGX’s market cap.

As you can see these stocks had an average of 28 hedge funds with bullish positions and the average amount invested in these stocks was $466 million. That figure was $710 million in ARGX’s case. Olin Corporation (NYSE:OLN) is the most popular stock in this table. On the other hand EnerSys (NYSE:ENS) is the least popular one with only 22 bullish hedge fund positions. argenx SE (NASDAQ:ARGX) is not the least popular stock in this group but hedge fund interest is still below average. Our calculations showed that top 15 most popular stocks) among hedge funds returned 24.2% through April 22nd and outperformed the S&P 500 ETF (SPY) by more than 7 percentage points. A small number of hedge funds were also right about betting on ARGX, though not to the same extent, as the stock returned 23.4% and outperformed the market as well.