Did Hedge Funds Drop The Ball On Appian Corporation (APPN)?

Appian Corporation (NASDAQ:APPN) has seen a decrease in enthusiasm from smart money recently. Our calculations also showed that APPN isn’t among the 30 most popular stocks among hedge funds (see the video below). 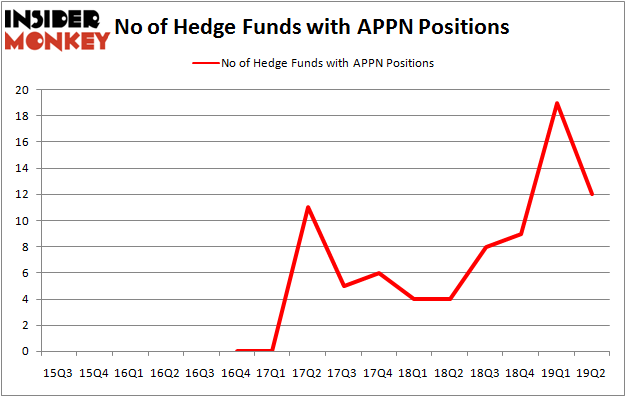 More specifically, Abdiel Capital Advisors was the largest shareholder of Appian Corporation (NASDAQ:APPN), with a stake worth $269.1 million reported as of the end of March. Trailing Abdiel Capital Advisors was D E Shaw, which amassed a stake valued at $20.8 million. StackLine Partners, Engle Capital, and Millennium Management were also very fond of the stock, giving the stock large weights in their portfolios.

Because Appian Corporation (NASDAQ:APPN) has faced declining sentiment from the entirety of the hedge funds we track, logic holds that there lies a certain “tier” of fund managers that elected to cut their positions entirely in the second quarter. It’s worth mentioning that Paul Marshall and Ian Wace’s Marshall Wace LLP dropped the biggest investment of all the hedgies watched by Insider Monkey, valued at an estimated $2.9 million in stock. James Thomas Berylson’s fund, Berylson Capital Partners, also said goodbye to its stock, about $2.3 million worth. These bearish behaviors are intriguing to say the least, as aggregate hedge fund interest dropped by 7 funds in the second quarter.

As you can see these stocks had an average of 15 hedge funds with bullish positions and the average amount invested in these stocks was $169 million. That figure was $336 million in APPN’s case. Penn National Gaming, Inc (NASDAQ:PENN) is the most popular stock in this table. On the other hand Power Integrations Inc (NASDAQ:POWI) is the least popular one with only 9 bullish hedge fund positions. Appian Corporation (NASDAQ:APPN) is not the least popular stock in this group but hedge fund interest is still below average. Our calculations showed that top 20 most popular stocks among hedge funds returned 24.4% in 2019 through September 30th and outperformed the S&P 500 ETF (SPY) by 4 percentage points. A small number of hedge funds were also right about betting on APPN as the stock returned 31.7% during the same time frame and outperformed the market by an even larger margin.