How do we determine whether American Woodmark Corporation (NASDAQ:AMWD) makes for a good investment at the moment? We analyze the sentiment of a select group of the very best investors in the world, who spend immense amounts of time and resources studying companies. They may not always be right (no one is), but data shows that their consensus long positions have historically outperformed the market when we adjust for known risk factors.

American Woodmark Corporation (NASDAQ:AMWD) investors should pay attention to a decrease in hedge fund sentiment of late. Our calculations also showed that AMWD isn’t among the 30 most popular stocks among hedge funds.

In the eyes of most stock holders, hedge funds are seen as underperforming, outdated investment vehicles of years past. While there are more than 8000 funds with their doors open at the moment, We hone in on the masters of this group, around 750 funds. It is estimated that this group of investors shepherd the lion’s share of the hedge fund industry’s total capital, and by observing their top investments, Insider Monkey has revealed a few investment strategies that have historically surpassed the market. Insider Monkey’s flagship hedge fund strategy beat the S&P 500 index by nearly 5 percentage points per annum since its inception in May 2014 through early November 2018. We were able to generate large returns even by identifying short candidates. Our portfolio of short stocks lost 27.5% since February 2017 (through March 12th) even though the market was up nearly 25% during the same period. We just shared a list of 6 short targets in our latest quarterly update and they are already down an average of 6% in less than a month. 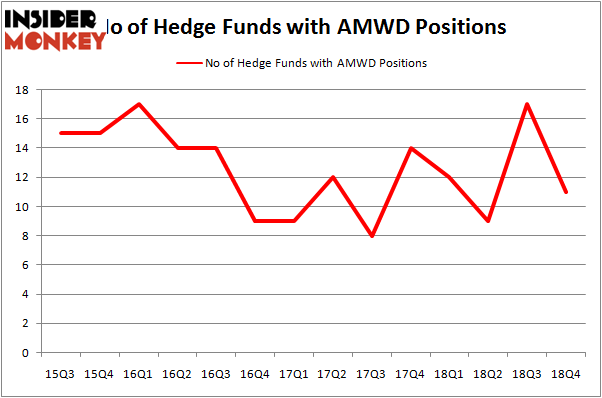 When looking at the institutional investors followed by Insider Monkey, Millennium Management, managed by Israel Englander, holds the largest position in American Woodmark Corporation (NASDAQ:AMWD). Millennium Management has a $15.5 million position in the stock, comprising less than 0.1%% of its 13F portfolio. The second most bullish fund manager is Joseph Samuels of Islet Management, with a $7 million position; 1.1% of its 13F portfolio is allocated to the stock. Remaining hedge funds and institutional investors with similar optimism consist of Chuck Royce’s Royce & Associates, Clint Murray’s Lodge Hill Capital and Paul Marshall and Ian Wace’s Marshall Wace LLP.

Due to the fact that American Woodmark Corporation (NASDAQ:AMWD) has experienced bearish sentiment from the entirety of the hedge funds we track, we can see that there was a specific group of fund managers who were dropping their full holdings last quarter. At the top of the heap, Sander Gerber’s Hudson Bay Capital Management sold off the biggest investment of the “upper crust” of funds tracked by Insider Monkey, totaling about $4.5 million in stock, and Steve Cohen’s Point72 Asset Management was right behind this move, as the fund dumped about $1.7 million worth. These moves are interesting, as total hedge fund interest fell by 6 funds last quarter.

As you can see these stocks had an average of 14.25 hedge funds with bullish positions and the average amount invested in these stocks was $65 million. That figure was $44 million in AMWD’s case. Renewable Energy Group Inc (NASDAQ:REGI) is the most popular stock in this table. On the other hand The Chefs Warehouse, Inc (NASDAQ:CHEF) is the least popular one with only 10 bullish hedge fund positions. American Woodmark Corporation (NASDAQ:AMWD) is not the least popular stock in this group but hedge fund interest is still below average. Our calculations showed that top 15 most popular stocks) among hedge funds returned 24.2% through April 22nd and outperformed the S&P 500 ETF (SPY) by more than 7 percentage points. A small number of hedge funds were also right about betting on AMWD as the stock returned 55.5% and outperformed the market by an even larger margin.