The Insider Monkey team has completed processing the quarterly 13F filings for the December quarter submitted by the hedge funds and other money managers included in our extensive database. Most hedge fund investors endured a torrid quarter, which certainly propelled them to adjust their equity holdings so as to maintain the desired risk profile. As a result, the relevancy of these public filings and their content is indisputable, as they may reveal numerous high-potential stocks. The following article will discuss the smart money sentiment towards Advanced Energy Industries, Inc. (NASDAQ:AEIS).

Advanced Energy Industries, Inc. (NASDAQ:AEIS) investors should pay attention to a decrease in hedge fund interest in recent months. AEIS was in 15 hedge funds’ portfolios at the end of the fourth quarter of 2018. There were 19 hedge funds in our database with AEIS positions at the end of the previous quarter. Our calculations also showed that aeis isn’t among the 30 most popular stocks among hedge funds.

How have hedgies been trading Advanced Energy Industries, Inc. (NASDAQ:AEIS)?

At the end of the fourth quarter, a total of 15 of the hedge funds tracked by Insider Monkey were long this stock, a change of -21% from the second quarter of 2018. Below, you can check out the change in hedge fund sentiment towards AEIS over the last 14 quarters. With hedge funds’ capital changing hands, there exists a few notable hedge fund managers who were adding to their stakes significantly (or already accumulated large positions). 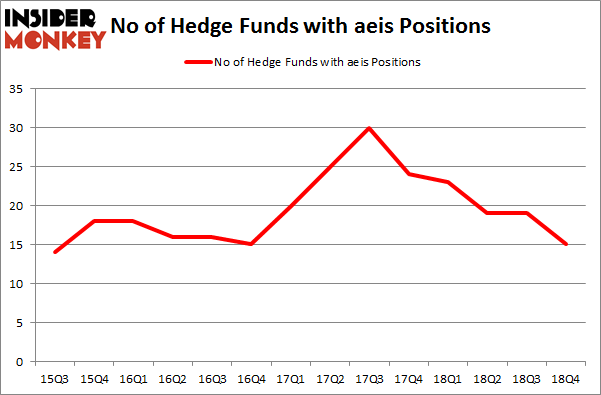 Among these funds, Renaissance Technologies held the most valuable stake in Advanced Energy Industries, Inc. (NASDAQ:AEIS), which was worth $67.6 million at the end of the fourth quarter. On the second spot was Royce & Associates which amassed $31.3 million worth of shares. Moreover, D E Shaw, GLG Partners, and Two Sigma Advisors were also bullish on Advanced Energy Industries, Inc. (NASDAQ:AEIS), allocating a large percentage of their portfolios to this stock.

Because Advanced Energy Industries, Inc. (NASDAQ:AEIS) has witnessed declining sentiment from the aggregate hedge fund industry, it’s easy to see that there was a specific group of hedge funds who were dropping their full holdings by the end of the third quarter. Interestingly, Ken Griffin’s Citadel Investment Group said goodbye to the largest position of the “upper crust” of funds monitored by Insider Monkey, totaling close to $5.2 million in stock, and Peter Muller’s PDT Partners was right behind this move, as the fund cut about $2.3 million worth. These bearish behaviors are intriguing to say the least, as total hedge fund interest was cut by 4 funds by the end of the third quarter.

Let’s go over hedge fund activity in other stocks – not necessarily in the same industry as Advanced Energy Industries, Inc. (NASDAQ:AEIS) but similarly valued. We will take a look at The Hain Celestial Group, Inc. (NASDAQ:HAIN), Signet Jewelers Limited (NYSE:SIG), Bloomin’ Brands Inc (NASDAQ:BLMN), and Sanmina Corporation (NASDAQ:SANM). This group of stocks’ market caps are closest to AEIS’s market cap.

As you can see these stocks had an average of 19.75 hedge funds with bullish positions and the average amount invested in these stocks was $228 million. That figure was $138 million in AEIS’s case. Bloomin’ Brands Inc (NASDAQ:BLMN) is the most popular stock in this table. On the other hand Sanmina Corporation (NASDAQ:SANM) is the least popular one with only 15 bullish hedge fund positions. Compared to these stocks Advanced Energy Industries, Inc. (NASDAQ:AEIS) is even less popular than SANM. Hedge funds clearly dropped the ball on AEIS as the stock delivered strong returns, though hedge funds’ consensus picks still generated respectable returns. Our calculations showed that top 15 most popular stocks) among hedge funds returned 24.2% through April 22nd and outperformed the S&P 500 ETF (SPY) by more than 7 percentage points. A small number of hedge funds were also right about betting on AEIS as the stock returned 33.7% and outperformed the market by an even larger margin.