Hedge fund managers like David Einhorn, Bill Ackman, or Carl Icahn became billionaires through reaping large profits for their investors, which is why piggybacking their stock picks may provide us with significant returns as well. Many hedge funds, like Paul Singer’s Elliott Management, are pretty secretive, but we can still get some insights by analyzing their quarterly 13F filings. One of the most fertile grounds for large abnormal returns is hedge funds’ most popular small-cap picks, which are not so widely followed and often trade at a discount to their intrinsic value. In this article we will check out hedge fund activity in another small-cap stock: Companhia Siderurgica Nacional (NYSE:SID).

Hedge fund interest in Companhia Siderurgica Nacional (NYSE:SID) shares was flat at the end of last quarter. This is usually a negative indicator. The level and the change in hedge fund popularity aren’t the only variables you need to analyze to decipher hedge funds’ perspectives. A stock may witness a boost in popularity but it may still be less popular than similarly priced stocks. That’s why at the end of this article we will examine companies such as Emergent Biosolutions Inc (NYSE:EBS), Semtech Corporation (NASDAQ:SMTC), and Trinity Industries, Inc. (NYSE:TRN) to gather more data points.

At the moment there are dozens of gauges stock market investors have at their disposal to assess stocks. A couple of the less known gauges are hedge fund and insider trading indicators. Our experts have shown that, historically, those who follow the best picks of the top investment managers can beat the market by a significant margin (see the details here).

How have hedgies been trading Companhia Siderurgica Nacional (NYSE:SID)? 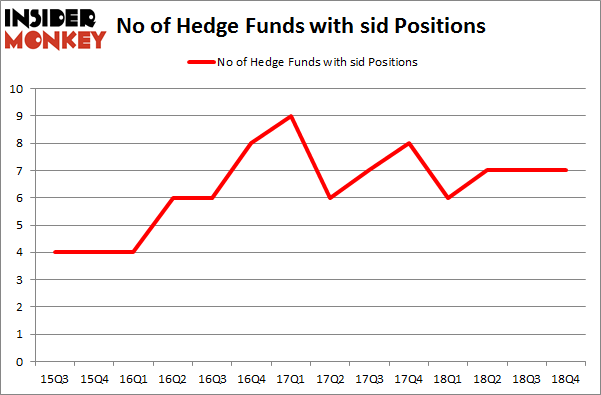 Among these funds, Renaissance Technologies held the most valuable stake in Companhia Siderurgica Nacional (NYSE:SID), which was worth $2.4 million at the end of the third quarter. On the second spot was Citadel Investment Group which amassed $1 million worth of shares. Moreover, Millennium Management, BlueCrest Capital Mgmt., and AQR Capital Management were also bullish on Companhia Siderurgica Nacional (NYSE:SID), allocating a large percentage of their portfolios to this stock.

We view hedge fund activity in the stock unfavorable, but in this case there was only a single hedge fund selling its entire position: Marshall Wace LLP. One hedge fund selling its entire position doesn’t always imply a bearish intent. Theoretically a hedge fund may decide to sell a promising position in order to invest the proceeds in a more promising idea. However, we don’t think this is the case in this case because only one of the 800+ hedge funds tracked by Insider Monkey identified as a viable investment and initiated a position in the stock (that fund was Two Sigma Advisors).

As you can see these stocks had an average of 16.75 hedge funds with bullish positions and the average amount invested in these stocks was $272 million. That figure was $4 million in SID’s case. Trinity Industries, Inc. (NYSE:TRN) is the most popular stock in this table. On the other hand Hutchison China MediTech Limited (NASDAQ:HCM) is the least popular one with only 5 bullish hedge fund positions. Companhia Siderurgica Nacional (NYSE:SID) is not the least popular stock in this group but hedge fund interest is still below average. Our calculations showed that top 15 most popular stocks) among hedge funds returned 24.2% through April 22nd and outperformed the S&P 500 ETF (SPY) by more than 7 percentage points. A small number of hedge funds were also right about betting on SID as the stock returned 71.7% and outperformed the market by an even larger margin.