“Since 2006, value stocks (IVE vs IVW) have underperformed 11 of the 13 calendar years and when they beat growth, it wasn’t by much. Cumulatively, through this week, it has been a 122% differential (up 52% for value vs up 174% for growth). This appears to be the longest and most severe drought for value investors since data collection began. It will go our way eventually as there are too many people paying far too much for today’s darlings, both public and private. Further, the ten-year yield of 2.5% (pre-tax) isn’t attractive nor is real estate. We believe the value part of the global equity market is the only place to earn solid risk adjusted returns and we believe those returns will be higher than normal,” said Vilas Fund in its Q1 investor letter. We aren’t sure whether value stocks outperform growth, but we follow hedge fund investor letters to understand where the markets and stocks might be going. That’s why we believe it would be worthwhile to take a look at the hedge fund sentiment on DHT Holdings Inc (NYSE:DHT) in order to identify whether reputable and successful top money managers continue to believe in its potential.

Hedge fund interest in DHT Holdings Inc (NYSE:DHT) shares was flat at the end of last quarter. This is usually a negative indicator. The level and the change in hedge fund popularity aren’t the only variables you need to analyze to decipher hedge funds’ perspectives. A stock may witness a boost in popularity but it may still be less popular than similarly priced stocks. That’s why at the end of this article we will examine companies such as MBIA Inc. (NYSE:MBI), Thermon Group Holdings, Inc. (NYSE:THR), and Retrophin Inc (NASDAQ:RTRX) to gather more data points. Our calculations also showed that DHT isn’t among the 30 most popular stocks among hedge funds (see the video below).

If you’d ask most investors, hedge funds are seen as unimportant, old investment tools of yesteryear. While there are over 8000 funds in operation today, Our experts hone in on the upper echelon of this club, around 750 funds. These hedge fund managers have their hands on bulk of all hedge funds’ total capital, and by tailing their finest investments, Insider Monkey has deciphered several investment strategies that have historically outpaced the S&P 500 index. Insider Monkey’s flagship hedge fund strategy outpaced the S&P 500 index by around 5 percentage points a year since its inception in May 2014. We were able to generate large returns even by identifying short candidates. Our portfolio of short stocks lost 25.7% since February 2017 (through September 30th) even though the market was up more than 33% during the same period. We just shared a list of 10 short targets in our latest quarterly update .

Heading into the third quarter of 2019, a total of 16 of the hedge funds tracked by Insider Monkey were long this stock, a change of 0% from the previous quarter. Below, you can check out the change in hedge fund sentiment towards DHT over the last 16 quarters. So, let’s find out which hedge funds were among the top holders of the stock and which hedge funds were making big moves. 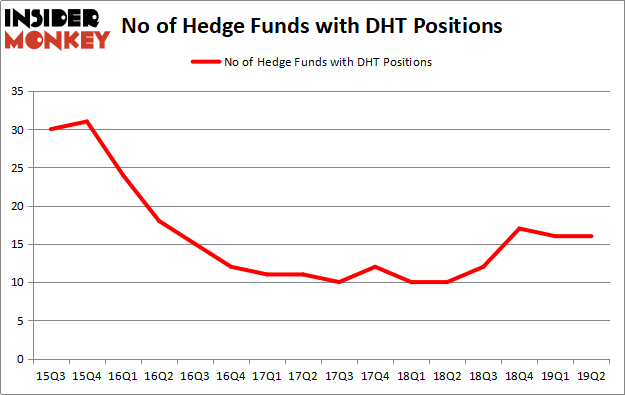 According to publicly available hedge fund and institutional investor holdings data compiled by Insider Monkey, Renaissance Technologies has the biggest position in DHT Holdings Inc (NYSE:DHT), worth close to $41.5 million, accounting for less than 0.1%% of its total 13F portfolio. The second most bullish fund manager is Lansdowne Partners, managed by Alex Snow, which holds a $18.9 million position; the fund has 0.5% of its 13F portfolio invested in the stock. Remaining peers with similar optimism comprise Israel Englander’s Millennium Management, Joshua Friedman and Mitchell Julis’s Canyon Capital Advisors and Ryan Heslop and Ariel Warszawski’s Firefly Value Partners.

Due to the fact that DHT Holdings Inc (NYSE:DHT) has faced falling interest from the entirety of the hedge funds we track, it’s safe to say that there exists a select few fund managers that decided to sell off their full holdings last quarter. Interestingly, Till Bechtolsheimer’s Arosa Capital Management said goodbye to the largest stake of all the hedgies monitored by Insider Monkey, comprising an estimated $2.6 million in stock. Matthew Hulsizer’s fund, PEAK6 Capital Management, also dropped its stock, about $1.7 million worth. These bearish behaviors are interesting, as total hedge fund interest stayed the same (this is a bearish signal in our experience).

As you can see these stocks had an average of 13 hedge funds with bullish positions and the average amount invested in these stocks was $157 million. That figure was $110 million in DHT’s case. Retrophin Inc (NASDAQ:RTRX) is the most popular stock in this table. On the other hand Connecticut Water Service, Inc. (NASDAQ:CTWS) is the least popular one with only 5 bullish hedge fund positions. DHT Holdings Inc (NYSE:DHT) is not the most popular stock in this group but hedge fund interest is still above average. Our calculations showed that top 20 most popular stocks among hedge funds returned 24.4% in 2019 through September 30th and outperformed the S&P 500 ETF (SPY) by 4 percentage points. Hedge funds were also right about betting on DHT, though not to the same extent, as the stock returned 4.4% during the third quarter and outperformed the market as well.