Is Delta Air Lines, Inc. (NYSE:DAL) going to take off soon? The smart money is in a bullish mood. The number of long hedge fund positions went up by 1 in recent months. Our calculations also showed that DAL isn’t among the 30 most popular stocks among hedge funds.

In the 21st century investor’s toolkit there are numerous metrics market participants put to use to value publicly traded companies. Two of the most underrated metrics are hedge fund and insider trading activity. Our experts have shown that, historically, those who follow the top picks of the top money managers can trounce their index-focused peers by a very impressive amount (see the details here).

At Q3’s end, a total of 67 of the hedge funds tracked by Insider Monkey were bullish on this stock, a change of 2% from the previous quarter. The graph below displays the number of hedge funds with bullish position in DAL over the last 13 quarters. With the smart money’s sentiment swirling, there exists a select group of key hedge fund managers who were boosting their holdings substantially (or already accumulated large positions). 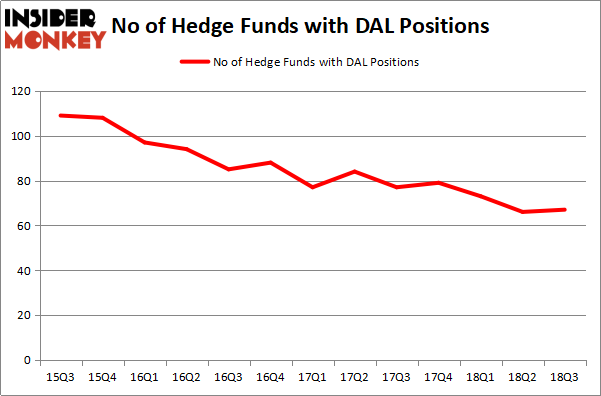 The largest stake in Delta Air Lines, Inc. (NYSE:DAL) was held by Berkshire Hathaway, which reported holding $3789.9 million worth of stock at the end of September. It was followed by Lansdowne Partners with a $1523 million position. Other investors bullish on the company included PAR Capital Management, AQR Capital Management, and Cyrus Capital Partners.

As you can see these stocks had an average of 23.5 hedge funds with bullish positions and the average amount invested in these stocks was $890 million. That figure was $7548 million in DAL’s case. LyondellBasell Industries NV (NYSE:LYB) is the most popular stock in this table. On the other hand The Royal Bank of Scotland Group plc (NYSE:RBS) is the least popular one with only 6 bullish hedge fund positions. Compared to these stocks Delta Air Lines, Inc. (NYSE:DAL) is more popular among hedge funds. Considering that hedge funds are fond of this stock in relation to its market cap peers, it may be a good idea to analyze it in detail and potentially include it in your portfolio.