Hedge fund interest in Dana Incorporated (NYSE:DAN) shares was flat at the end of last quarter. This is usually a negative indicator. At the end of this article we will also compare DAN to other stocks including Ambarella Inc (NASDAQ:AMBA), ESCO Technologies Inc. (NYSE:ESE), and Ladder Capital Corp (NYSE:LADR) to get a better sense of its popularity.

To the average investor there are plenty of methods investors employ to appraise their stock investments. Two of the less utilized methods are hedge fund and insider trading indicators. Our researchers have shown that, historically, those who follow the top picks of the best investment managers can outperform the S&P 500 by a solid margin (see the details here).

We leave no stone unturned when looking for the next great investment idea. For example Europe is set to become the world’s largest cannabis market, so we check out this European marijuana stock pitch. We read hedge fund investor letters and listen to stock pitches at hedge fund conferences. This December, we recommended Adams Energy as a one-way bet based on an under-the-radar fund manager’s investor letter and the stock is still extremely cheap despite already gaining 20 percent. Now let’s take a look at the fresh hedge fund action regarding Dana Incorporated (NYSE:DAN). 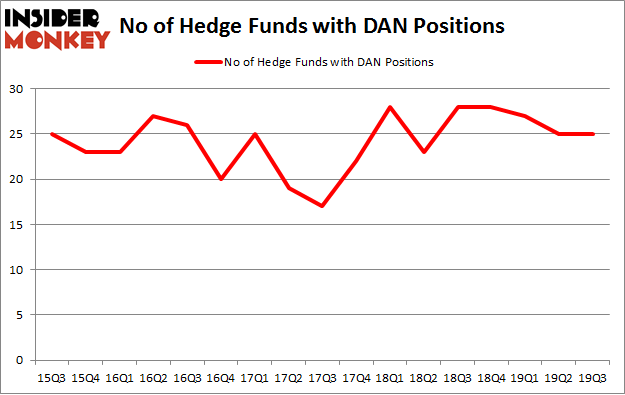 According to publicly available hedge fund and institutional investor holdings data compiled by Insider Monkey, Cliff Asness’s AQR Capital Management has the largest position in Dana Incorporated (NYSE:DAN), worth close to $55.1 million, comprising 0.1% of its total 13F portfolio. On AQR Capital Management’s heels is GAMCO Investors, led by Mario Gabelli, holding a $50.7 million position; 0.4% of its 13F portfolio is allocated to the stock. Other members of the smart money that are bullish encompass Matthew Barrett’s Glendon Capital Management, Robert Polak’s Anchor Bolt Capital and Dmitry Balyasny’s Balyasny Asset Management. In terms of the portfolio weights assigned to each position Glendon Capital Management allocated the biggest weight to Dana Incorporated (NYSE:DAN), around 4.28% of its 13F portfolio. Anchor Bolt Capital is also relatively very bullish on the stock, earmarking 3.09 percent of its 13F equity portfolio to DAN.

Since Dana Incorporated (NYSE:DAN) has witnessed declining sentiment from hedge fund managers, it’s easy to see that there is a sect of funds that slashed their entire stakes last quarter. Intriguingly, Javier Velazquez’s Albar Capital dropped the largest position of all the hedgies monitored by Insider Monkey, worth an estimated $5.6 million in stock, and Joel Greenblatt’s Gotham Asset Management was right behind this move, as the fund sold off about $3.2 million worth. These bearish behaviors are intriguing to say the least, as aggregate hedge fund interest stayed the same (this is a bearish signal in our experience).

As you can see these stocks had an average of 15.5 hedge funds with bullish positions and the average amount invested in these stocks was $114 million. That figure was $192 million in DAN’s case. Ambarella Inc (NASDAQ:AMBA) is the most popular stock in this table. On the other hand ESCO Technologies Inc. (NYSE:ESE) is the least popular one with only 8 bullish hedge fund positions. Dana Incorporated (NYSE:DAN) is not the most popular stock in this group but hedge fund interest is still above average. Our calculations showed that top 20 most popular stocks among hedge funds returned 41.3% in 2019 and outperformed the S&P 500 ETF (SPY) by 10.1 percentage points. Hedge funds were also right about betting on DAN, though not to the same extent, as the stock returned 36.9% during 2019 and outperformed the market as well.