Last year’s fourth quarter was a rough one for investors and many hedge funds, which were naturally unable to overcome the big dip in the broad market, as the S&P 500 fell by about 4.8% during 2018 and average hedge fund losing about 1%. The Russell 2000, composed of smaller companies, performed even worse, trailing the S&P by more than 6 percentage points, as investors fled less-known quantities for safe havens. Luckily hedge funds were shifting their holdings into large-cap stocks. The 20 most popular hedge fund stocks actually generated an average return of 37.4% in 2019 (through the end of November) and outperformed the S&P 500 ETF by 9.9 percentage points. We are done processing the latest 13F filings and in this article we will study how hedge fund sentiment towards Cyclerion Therapeutics, Inc. (NASDAQ:CYCN) changed during the first quarter.

Cyclerion Therapeutics, Inc. (NASDAQ:CYCN) has experienced a decrease in hedge fund interest in recent months. Our calculations also showed that CYCN isn’t among the 30 most popular stocks among hedge funds (click for Q3 rankings and see the video below for Q2 rankings).

Today there are numerous methods stock market investors have at their disposal to grade publicly traded companies. Two of the less utilized methods are hedge fund and insider trading indicators. Our experts have shown that, historically, those who follow the top picks of the top hedge fund managers can beat their index-focused peers by a superb amount (see the details here).

We leave no stone unturned when looking for the next great investment idea. For example Europe is set to become the world’s largest cannabis market, so we check out this European marijuana stock pitch. One of the most bullish analysts in America just put his money where his mouth is. He says, “I’m investing more today than I did back in early 2009.” So we check out his pitch. We read hedge fund investor letters and listen to stock pitches at hedge fund conferences. We also rely on the best performing hedge funds‘ buy/sell signals. We’re going to review the fresh hedge fund action encompassing Cyclerion Therapeutics, Inc. (NASDAQ:CYCN).

At Q3’s end, a total of 14 of the hedge funds tracked by Insider Monkey held long positions in this stock, a change of -18% from one quarter earlier. The graph below displays the number of hedge funds with bullish position in CYCN over the last 17 quarters. With the smart money’s capital changing hands, there exists a select group of key hedge fund managers who were upping their holdings considerably (or already accumulated large positions). 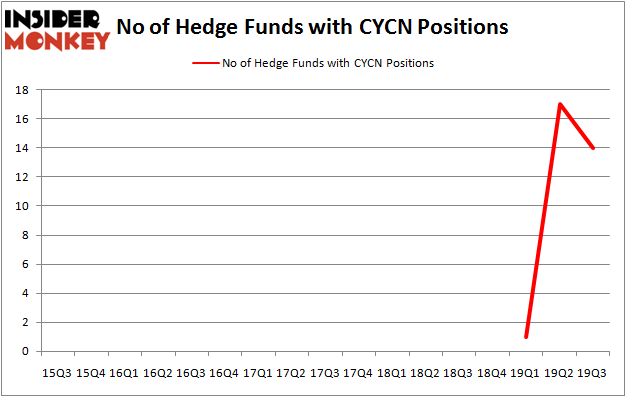 According to Insider Monkey’s hedge fund database, Stephen DuBois’s Camber Capital Management has the largest position in Cyclerion Therapeutics, Inc. (NASDAQ:CYCN), worth close to $27 million, accounting for 1.4% of its total 13F portfolio. On Camber Capital Management’s heels is Farhad Nanji and Michael DeMichele of MFN Partners, with a $18 million position; 2.7% of its 13F portfolio is allocated to the stock. Some other members of the smart money with similar optimism contain David Greenspan’s Slate Path Capital, Oleg Nodelman’s EcoR1 Capital and Farallon Capital. In terms of the portfolio weights assigned to each position MFN Partners allocated the biggest weight to Cyclerion Therapeutics, Inc. (NASDAQ:CYCN), around 2.7% of its 13F portfolio. Camber Capital Management is also relatively very bullish on the stock, setting aside 1.42 percent of its 13F equity portfolio to CYCN.

Since Cyclerion Therapeutics, Inc. (NASDAQ:CYCN) has witnessed a decline in interest from hedge fund managers, it’s safe to say that there is a sect of money managers who were dropping their entire stakes heading into Q4. At the top of the heap, Roberto Mignone’s Bridger Management dumped the biggest stake of the 750 funds followed by Insider Monkey, worth an estimated $11.8 million in stock. Alex Denner’s fund, Sarissa Capital Management, also dumped its stock, about $2.9 million worth. These moves are important to note, as aggregate hedge fund interest fell by 3 funds heading into Q4.

As you can see these stocks had an average of 10.5 hedge funds with bullish positions and the average amount invested in these stocks was $40 million. That figure was $80 million in CYCN’s case. CRA International, Inc. (NASDAQ:CRAI) is the most popular stock in this table. On the other hand Rafael Holdings, Inc. (NYSE:RFL) is the least popular one with only 6 bullish hedge fund positions. Cyclerion Therapeutics, Inc. (NASDAQ:CYCN) is not the most popular stock in this group but hedge fund interest is still above average. This is a slightly positive signal but we’d rather spend our time researching stocks that hedge funds are piling on. Our calculations showed that top 20 most popular stocks among hedge funds returned 37.4% in 2019 through the end of November and outperformed the S&P 500 ETF (SPY) by 9.9 percentage points. Unfortunately CYCN wasn’t nearly as popular as these 20 stocks and hedge funds that were betting on CYCN were disappointed as the stock returned -84.7% during the fourth quarter (through the end of November) and underperformed the market. If you are interested in investing in large cap stocks with huge upside potential, you should check out the top 20 most popular stocks among hedge funds as many of these stocks already outperformed the market so far this year.