Crown Castle (CCI) only increased dividends for 5 years in a row. Crown Castle initiated its first dividend in 2014, after converting to a Real Estate Investment Trust. 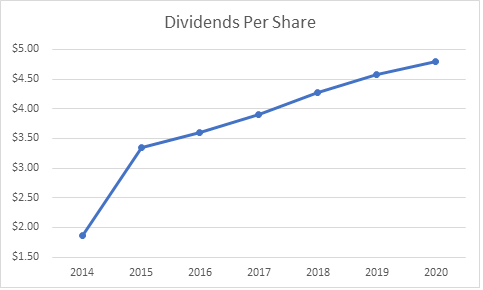 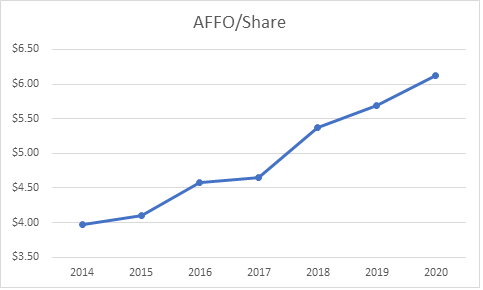 I first learned about Crown, American Towers (AMT) and SBA Communications (SBAC) through my regular business interactions in the telecom industry several years ago. And I like the business model and fundamentals behind the industry. I like Crown for its dividend, which I believe is well covered and has the ability to grow over time.

Crown offers cell towers under long-term agreements with telecom carriers. A typical tower leases has an initial term of 20 years, which then gets renewed every five years. Those leases cannot be broken easily (perhaps a bankruptcy of a carrier is the only way out from the contractual clauses). There are contractual escalation amounts each year, which ensures growth in profits over time.  There is a considerable amount of red tape in establishing a cell site location, and navigating local laws and regulations. Needless to say, it is not easy to set up towers just like that. It would be difficult for a competitor to set up a tower next door.

Companies earn their money by signing up several customers to its towers. The return on investment increases from low single digit percentages for one customer to a double-digit percentage with three or more clients. Therefore, having multiple carriers is good for Crown Castle (CCI).

The risk comes from consolidations with major clients – when the number of potential clients decreases over time, the potential profits are limited. The merger between Sprint and T-Mobile could impact cell tower companies like this one. However, while Sprint and T-Mobile account for a total of 38% of CCI’s revenues, not all is lost since there is overlap in just 5% of CCI’s towers. In other words, the company would most likely lose a little over 5% of revenues if Sprint & T-Mobile were to merge and shut down overlapping sites right away. In reality, sites can be decommissioned but they would still have to pay until the end of the contractual term. The weighted average remaining lease term on that 5% is five to seven years.

The FFO payout has remained around 80% since 2015. The company converted to a REIT in 2014, after which it immediately ramped up its dividend payout. I find it to be sustainable, and well covered from the dependable rent streams under long-term contracts with escalation clauses. 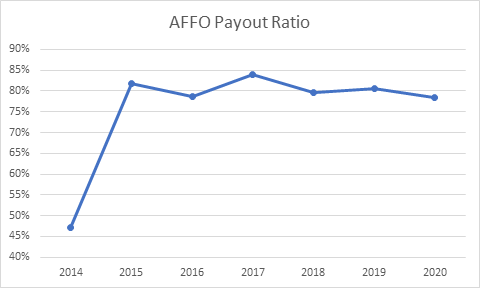 The REIT is overvalued today. And I want to buy Crown Castle (CCI) for 20 times forward FFO and a dividend yield of 4% or better. This translates into an entry price in the $120 – $125/share range, or lower.