Before we spend countless hours researching a company, we like to analyze what insiders, hedge funds and billionaire investors think of the stock first. This is a necessary first step in our investment process because our research has shown that the elite investors’ consensus returns have been exceptional. In the following paragraphs, we find out what the billionaire investors and hedge funds think of Cresud S.A.C.I.F. y A. (NASDAQ:CRESY).

Cresud S.A.C.I.F. y A. (NASDAQ:CRESY) shares haven’t seen a lot of action during the second quarter. Overall, hedge fund sentiment was unchanged. The stock was in 7 hedge funds’ portfolios at the end of June. The level and the change in hedge fund popularity aren’t the only variables you need to analyze to decipher hedge funds’ perspectives. A stock may witness a boost in popularity but it may still be less popular than similarly priced stocks. That’s why at the end of this article we will examine companies such as Aurinia Pharmaceuticals Inc (NASDAQ:AUPH), TPG Pace Holdings Corp. (NYSE:TPGH), and ChipMOS Technologies (Bermuda) Ltd (NASDAQ:IMOS) to gather more data points. Our calculations also showed that CRESY isn’t among the 30 most popular stocks among hedge funds (see the video below).

In the financial world there are a multitude of gauges shareholders put to use to size up their holdings. Two of the less utilized gauges are hedge fund and insider trading signals. We have shown that, historically, those who follow the best picks of the elite investment managers can trounce the market by a superb margin (see the details here).

In addition to following the biggest hedge funds for investment ideas, we also share stock pitches from conferences, investor letters and other sources  like this one where the fund manager is talking about two under the radar 1000% return potential stocks: first one in internet infrastructure and the second in the heart of advertising market. We use hedge fund buy/sell signals to determine whether to conduct in-depth analysis of these stock ideas which take days. Now we’re going to check out the recent hedge fund action surrounding Cresud S.A.C.I.F. y A. (NASDAQ:CRESY).

What does smart money think about Cresud S.A.C.I.F. y A. (NASDAQ:CRESY)?

Heading into the third quarter of 2019, a total of 7 of the hedge funds tracked by Insider Monkey were long this stock, a change of 0% from the previous quarter. The graph below displays the number of hedge funds with bullish position in CRESY over the last 16 quarters. With hedgies’ capital changing hands, there exists a select group of key hedge fund managers who were increasing their stakes considerably (or already accumulated large positions). 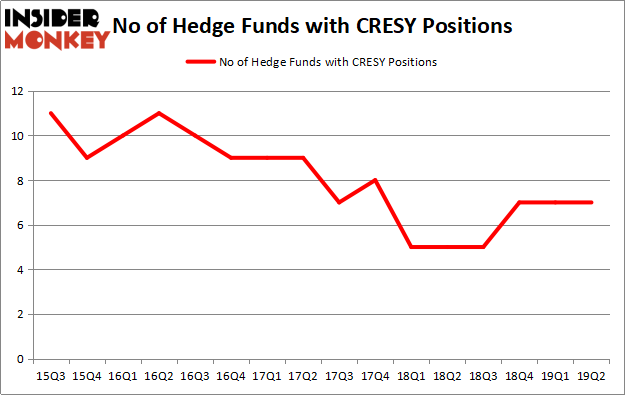 More specifically, General Equity Partners was the largest shareholder of Cresud S.A.C.I.F. y A. (NASDAQ:CRESY), with a stake worth $9.2 million reported as of the end of March. Trailing General Equity Partners was 683 Capital Partners, which amassed a stake valued at $8.9 million. Serengeti Asset Management, Renaissance Technologies, and Highland Capital Management were also very fond of the stock, giving the stock large weights in their portfolios.

Since Cresud S.A.C.I.F. y A. (NASDAQ:CRESY) has faced bearish sentiment from the smart money, we can see that there exists a select few hedgies that elected to cut their full holdings heading into Q3. Interestingly, Richard Mashaal’s Rima Senvest Management dumped the biggest position of all the hedgies watched by Insider Monkey, totaling about $4.1 million in stock. Israel Englander’s fund, Millennium Management, also sold off its stock, about $0.7 million worth. These moves are intriguing to say the least, as total hedge fund interest stayed the same (this is a bearish signal in our experience).

Let’s go over hedge fund activity in other stocks – not necessarily in the same industry as Cresud S.A.C.I.F. y A. (NASDAQ:CRESY) but similarly valued. We will take a look at Aurinia Pharmaceuticals Inc (NASDAQ:AUPH), TPG Pace Holdings Corp. (NYSE:TPGH), ChipMOS TECHNOLOGIES INC. (NASDAQ:IMOS), and America’s Car-Mart, Inc. (NASDAQ:CRMT). This group of stocks’ market values are closest to CRESY’s market value.

As you can see these stocks had an average of 13.75 hedge funds with bullish positions and the average amount invested in these stocks was $110 million. That figure was $23 million in CRESY’s case. America’s Car-Mart, Inc. (NASDAQ:CRMT) is the most popular stock in this table. On the other hand ChipMOS Technologies (Bermuda) Ltd (NASDAQ:IMOS) is the least popular one with only 2 bullish hedge fund positions. Cresud S.A.C.I.F. y A. (NASDAQ:CRESY) is not the least popular stock in this group but hedge fund interest is still below average. This is a slightly negative signal and we’d rather spend our time researching stocks that hedge funds are piling on. Our calculations showed that top 20 most popular stocks among hedge funds returned 24.4% in 2019 through September 30th and outperformed the S&P 500 ETF (SPY) by 4 percentage points. Unfortunately CRESY wasn’t nearly as popular as these 20 stocks (hedge fund sentiment was quite bearish); CRESY investors were disappointed as the stock returned -43.6% during the third quarter and underperformed the market. If you are interested in investing in large cap stocks with huge upside potential, you should check out the top 20 most popular stocks among hedge funds as many of these stocks already outperformed the market so far in 2019.