Before we spend days researching a stock idea we’d like to take a look at how hedge funds and billionaire investors recently traded that stock. S&P 500 Index ETF (SPY) lost 13.5% in the fourth quarter. Seven out of 11 industry groups in the S&P 500 Index were down more than 20% from their 52-week highs at the trough of the stock market crash. The average return of a randomly picked stock in the index was even worse. This means you (or a monkey throwing a dart) have less than an even chance of beating the market by randomly picking a stock. On the other hand, the top 15 most popular S&P 500 stocks among hedge funds not only recouped their Q4 losses but also outperformed the index by more than 3 percentage points. In this article, we will take a look at what hedge funds think about Concho Resources Inc. (NYSE:CXO).

What does the smart money think about Concho Resources Inc. (NYSE:CXO)? 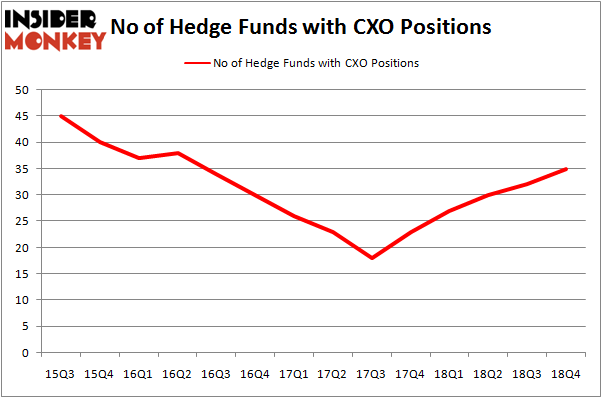 More specifically, Point72 Asset Management was the largest shareholder of Concho Resources Inc. (NYSE:CXO), with a stake worth $83.8 million reported as of the end of September. Trailing Point72 Asset Management was Citadel Investment Group, which amassed a stake valued at $62.5 million. Renaissance Technologies, Millennium Management, and SailingStone Capital Partners were also very fond of the stock, giving the stock large weights in their portfolios.

As industrywide interest jumped, some big names were leading the bulls’ herd. Renaissance Technologies, managed by Jim Simons, initiated the largest position in Concho Resources Inc. (NYSE:CXO). Renaissance Technologies had $46.2 million invested in the company at the end of the quarter. MacKenzie B. Davis and Kenneth L. Settles Jr’s SailingStone Capital Partners also made a $30.1 million investment in the stock during the quarter. The other funds with new positions in the stock are Perella Weinberg Partners, Todd J. Kantor’s Encompass Capital Advisors, and Matt Smith’s Deep Basin Capital.

As you can see these stocks had an average of 33 hedge funds with bullish positions and the average amount invested in these stocks was $1352 million. That figure was $451 million in CXO’s case. Royal Caribbean Cruises Ltd. (NYSE:RCL) is the most popular stock in this table. On the other hand Telefonica Brasil SA (NYSE:VIV) is the least popular one with only 12 bullish hedge fund positions. Concho Resources Inc. (NYSE:CXO) is not the most popular stock in this group but hedge fund interest is still above average. This is a slightly positive signal but we’d rather spend our time researching stocks that hedge funds are piling on. Our calculations showed that top 15 most popular stocks among hedge funds returned 19.7% through March 15th and outperformed the S&P 500 ETF (SPY) by 6.6 percentage points. Unfortunately CXO wasn’t in this group. Hedge funds that bet on CXO were disappointed as the stock returned 0.9% and underperformed the market. If you are interested in investing in large cap stocks, you should check out the top 15 hedge fund stocks as 13 of these outperformed the market.