Comcast Corporation (CMCSA): Are Hedge Funds Right About This Stock?

It is already common knowledge that individual investors do not usually have the necessary resources and abilities to properly research an investment opportunity. As a result, most investors pick their illusory “winners” by making a superficial analysis and research that leads to poor performance on aggregate. Since stock returns aren’t usually symmetrically distributed and index returns are more affected by a few outlier stocks (i.e. the FAANG stocks dominating and driving S&P 500 Index’s returns in recent years), more than 50% of the constituents of the Standard and Poor’s 500 Index underperform the benchmark. Hence, if you randomly pick a stock, there is more than 50% chance that you’d fail to beat the market. At the same time, the 15 most favored S&P 500 stocks by the hedge funds monitored by Insider Monkey generated a return of 19.7% during the first 2.5 months of 2019 (vs. 13.1% gain for SPY), with 93% of these stocks outperforming the benchmark. Of course, hedge funds do make wrong bets on some occasions and these get disproportionately publicized on financial media, but piggybacking their moves can beat the broader market on average. That’s why we are going to go over recent hedge fund activity in Comcast Corporation (NASDAQ:CMCSA).

Comcast Corporation (NASDAQ:CMCSA) was in 83 hedge funds’ portfolios at the end of December. CMCSA investors should be aware of a decrease in activity from the world’s largest hedge funds recently. There were 92 hedge funds in our database with CMCSA holdings at the end of the previous quarter. Our calculations also showed that CMCSA is among the 30 most popular stocks among hedge funds, ranking 19th.

Heading into the first quarter of 2019, a total of 83 of the hedge funds tracked by Insider Monkey were bullish on this stock, a change of -10% from the second quarter of 2018. By comparison, 97 hedge funds held shares or bullish call options in CMCSA a year ago. With the smart money’s positions undergoing their usual ebb and flow, there exists an “upper tier” of key hedge fund managers who were increasing their holdings considerably (or already accumulated large positions). 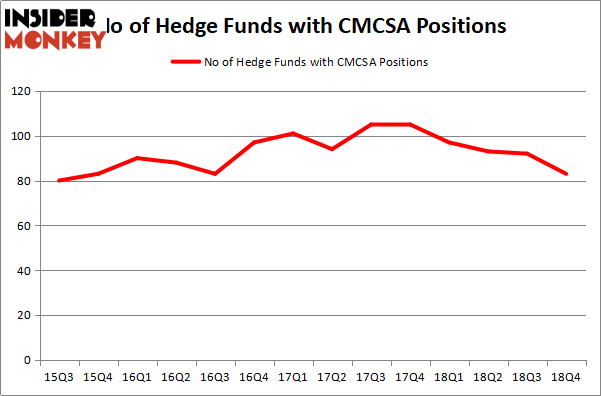 Among these funds, Eagle Capital Management held the most valuable stake in Comcast Corporation (NASDAQ:CMCSA), which was worth $1121.5 million at the end of the third quarter. On the second spot was Citadel Investment Group which amassed $448.8 million worth of shares. Moreover, First Pacific Advisors LLC, Two Sigma Advisors, and AQR Capital Management were also bullish on Comcast Corporation (NASDAQ:CMCSA), allocating a large percentage of their portfolios to this stock.

Because Comcast Corporation (NASDAQ:CMCSA) has witnessed falling interest from hedge fund managers, it’s easy to see that there was a specific group of fund managers who sold off their full holdings last quarter. Intriguingly, Joshua Friedman and Mitchell Julis’s Canyon Capital Advisors dropped the biggest stake of the 700 funds followed by Insider Monkey, totaling close to $141.6 million in stock. David Fear’s fund, Thunderbird Partners, also dumped its stock, about $129.1 million worth. These transactions are important to note, as aggregate hedge fund interest dropped by 9 funds last quarter.

Let’s also examine hedge fund activity in other stocks – not necessarily in the same industry as Comcast Corporation (NASDAQ:CMCSA) but similarly valued. We will take a look at Unilever plc (NYSE:UL), AbbVie Inc (NYSE:ABBV), McDonald’s Corporation (NYSE:MCD), and TOTAL S.A. (NYSE:TOT). This group of stocks’ market valuations are closest to CMCSA’s market valuation.

As you can see these stocks had an average of 29 hedge funds with bullish positions and the average amount invested in these stocks was $1319 million. That figure was $6160 million in CMCSA’s case. McDonald’s Corporation (NYSE:MCD) is the most popular stock in this table. On the other hand TOTAL S.A. (NYSE:TOT) is the least popular one with only 9 bullish hedge fund positions. Compared to these stocks Comcast Corporation (NASDAQ:CMCSA) is more popular among hedge funds. Our calculations showed that top 15 most popular stocks among hedge funds returned 19.7% through March 15th and outperformed the S&P 500 ETF (SPY) by 6.6 percentage points. Hedge funds were also right about betting on Comcast as the stock returned 18.9% and outperformed the market as well.