Entertainment retailers are drawing battle lines as they race to add new streaming services and original content in hopes of winning over more viewers. The stakes are particularly high for Coinstar, Inc. (NASDAQ:CSTR) and Netflix, Inc. (NASDAQ:NFLX) as the companies struggle to get ahead in an increasingly competitive and capital-intensive industry. Today, let’s evaluate these companies and uncover which stock investors should own in the year ahead.

DV-Disappointment
The parent company of Redbox DVD kiosks has been getting some negative press lately. Shares of Coinstar plummeted last week after the company reported slightly disappointing results for its fourth quarter, and issued a weak forecast for the current quarter.

Despite delivering on the bottom line, the company saw its fourth-quarter revenue slide in at $564 million, whereas analysts were expecting revenue of $581 million for the period. As a result, investors sent shares down 8% last Friday. But that’s not all.

There is something much more worrisome than investor sentiment for the company these days: increased competition from digital heavyweights Netflix and Amazon.com, Inc. (NASDAQ:AMZN) , both of which have a head start when it comes to streaming movies.

Life is but a stream
Before we jump into the streaming side of things, let’s first see how these companies measure up in terms of stock performance. As Coinstar plummeted last week, Netflix locked in more gains for the year. Investors sent shares of Netflix soaring last month, after the company reported better-than-expected fourth-quarter earnings. 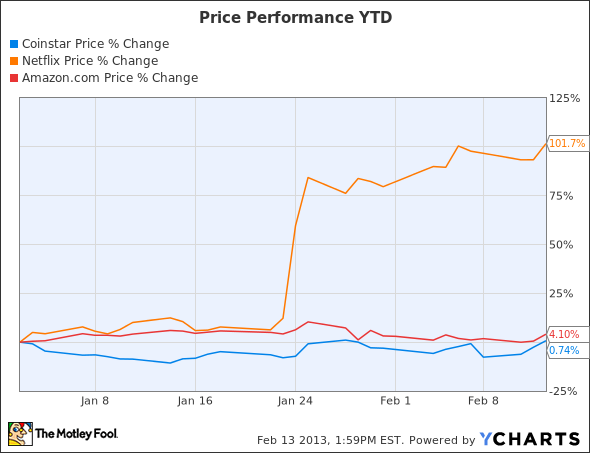 As you can see in the chart above, Netflix is dominating this year in terms of stock performance. Indeed, the company has come a long way since hitting rock bottom in 2011. But what really stood out in Netflix’s most recent quarter was the ballooning number of streaming subscribers. In the fourth quarter, the company added more than 2 million new U.S. subscribers to its streaming service.

Overall, Netflix now leads with 27.2 million digital subscribers in the U.S., not to mention an additional 6.1 million subscribers in international markets. As a result, shares of Netflix are up more than 92% year to date. Coinstar’s stock, on the other hand, is down year to date.

Digital divide
Less surprising is the fact that Netflix DVD rental subscriptions continue to decline. This doesn’t bode well for Coinstar, either, whose company is currently centered on the DVD rental business. Nevertheless, Coinstar isn’t going down without a fight.