There are a number of global investment trends, and the growth of the wealthy shouldn’t be ignored. The latest estimates show that the number of millionaires has increased significantly throughout the world. Some luxury firms like Apple Inc. (NASDAQ:AAPL) have become huge and seen their growth taper off. At the same time, there are a number of smaller firms with strong brand power that are growing and are attractive investment opportunities. 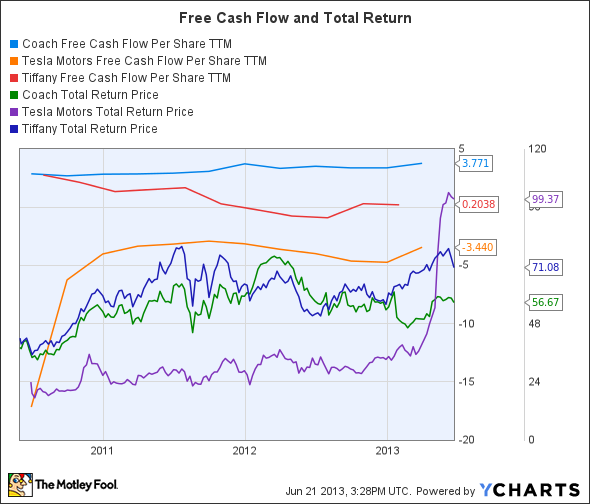 Coach, Inc. (NYSE:COH) sells a number of luxury handbags, shoes, wallets and sunglasses. Its one-year EPS growth rate of 18% and one-year 14.5% revenue growth rate are higher than its respective five year EPS and revenue growth rates. There are signs that the Wall Street has missed Coach, Inc. (NYSE:COH)’s growth. The company is improving, while the market has punished the company with a falling stock price. Now Coach is left with a P/E ratio around 16.

The company has some positive catalysts, as its CEO will be replaced in 2014 by the executive who engineered the company’s success in China. While Coach, Inc. (NYSE:COH) has suffered from poor prospects in North America, it has been able to maintain strong double digit comparable same store sales growth in China. The change in executives should help to bring North American operations back up. Coach, Inc. (NYSE:COH) continues to produce a strong amount of free cash flow and take advantage of the Asian boom.

Tesla Motors Inc (NASDAQ:TSLA) produces popular luxury electric cars. Its products are significantly more expensive than mass market electric cars like the Prius, but this allows Tesla Motors Inc (NASDAQ:TSLA) to focus on consumers who are less dependent on government subsidies. The strategy should help out the company in the long term, and it allows investors to take a bet on the growing global luxury market.

More efficient production and inventory management have decreased the number of hours required to build a car by 40% and freed up capital. At the same time, Tesla Motors Inc (NASDAQ:TSLA) is looking at a very capital intensive future. It plans to build a supercharger network to make it easier for customers to drive long distance, and it recently unveiled plans to make 90 second battery pack switching stations. At half a million dollars a pop the battery switching device isn’t cheap, but it refills a car’s energy in less time than it takes to fill up a gas tank.

Financially Tesla Motors Inc (NASDAQ:TSLA) looks rather shaky. It has a total debt to equity ratio of 2.7, a return on investment (ROI) of -52% and a profit margin of -31.2%. As any investor in Amazon.com, Inc. (NASDAQ:AMZN) can attest, a company doesn’t need to make profits for its stock price to boom. If Tesla Motors Inc (NASDAQ:TSLA) can find the capital it needs and build out the infrastructure to make electric cars a viable option, its business will boom. At the same time, its capital intensive growth plans and lack of profits could leave the company dead in its tracks.

Tiffany & Co. (NYSE:TIF) is famous for its luxury jewelry products, and like other luxury retail firms it has pivoted to Asia. In the last quarter, its Asia Pacific same store sales increased 9% while same store sales in the Americas only grew by 3%. This year the majority of its new stores will be found in the Asia Pacific region. It is important to note that the company’s free cash flow has fallen over the past couple years. Unlike Coach, Inc. (NYSE:COH), Tiffany & Co. (NYSE:TIF)’s revenue and EPS growth rates have been falling.