When many investors think of the fashion industry, they tend to think of handbags. After all, companies like Louis Vuitton, Burberry, Prada, and Gucci built empires on the endless desire for pricey purses and accessories. Over the past several decades, however, a new class of affordable luxury handbags, which cost hundreds of dollars rather than thousands, has emerged.

Although this market was once dominated by Coach, Inc. (NYSE:COH), which was founded in 1941, younger brands like Michael Kors Holdings Ltd (NYSE:KORS) and Fifth & Pacific Companies Inc (NYSE:FNP)’s Kate Spade have emerged as major contenders in an increasingly crowded market. Which of these three fashionable companies is best positioned to capitalize on rising consumer sentiment, which hit a six-year high in July?

Shares of Coach, Inc. (NYSE:COH), the largest name in affordable luxury handbags and accessories, plunged on July 30, after the company reported a drop in profit, weak same-store sales, and the departure of two key executives — Mike Tucci, the President of the North American segment, and Jerry Stritzke, the company’s President and Chief Operating Officer.

For its fourth quarter, Coach, Inc. (NYSE:COH) earned an adjusted $0.89 per share, up 3.5% from the $0.86 per share it reported in the prior year quarter. Sales rose 5.8% year-on-year to $1.22 billion. Coach’s profit was in line with analyst estimates, but revenue came up short of the consensus estimate of $1.24 billion. 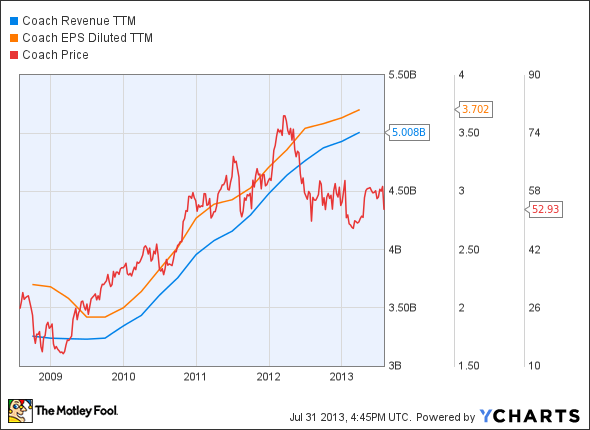 Coach, Inc. (NYSE:COH) reported solid sales growth across the globe, with a 5.6% increase in North America and a 6.6% gain in international markets. However, North American same-store sales declined 1.7% while direct-to-consumer sales rose 5%, indicating that more purchases were made online rather than at brick-and-mortar locations.

China was the standout performer in the international markets, reporting a year-on-year sales increase of 35%. Although Japan reported a 4% sales increase on a constant currency basis, sales actually declined 15% on a dollar basis, due to the dramatic weakening of the yen during the quarter.

In recent years, Coach, Inc. (NYSE:COH) has attempted to expand its fashion collection to include more accessories, clothing, shoes, and men’s bags. Coach also plans to emphasize its outlet stores over its full-price locations in an effort to improve sales volume. However, Coach’s executives don’t believe that the addition of all these products and a renewed focus on lower-end consumers will directly boost same-store sales, which are still forecast to rise at a “low to mid-single” digit rate for the rest of the year.

In other words, Coach’s numbers tell the same old story for the company — its numbers are still rising, but stale single-digit growth just isn’t appealing when compared to Wall Street’s favorite new kid on the block, Michael Kors.

Michael Kors Holdings Ltd (NYSE:KORS), which went public in December 2011, has become a favorite of shoppers and investors alike. Last quarter, the company reported earnings and revenue growth of 131.8% and 57.1%, respectively, a trend that Wall Street expects to continue when it reports first quarter earnings on August 6. 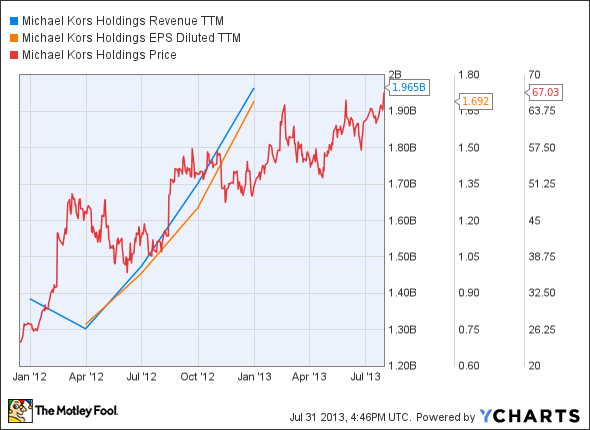 Under the guidance of designer Michael Kors Holdings Ltd (NYSE:KORS), who rose to international fame as a judge on Project Runway, and CEO John Idol, Kors has established itself as the trendy affordable luxury brand that makes Coach look stodgy and dated by comparison. Same-store sales climbed 35% year-on-year in North America and surged 63% in Europe — growth rates that Coach can only dream of. Kors is also quickly establishing footholds across Asia and penetrating key markets such as China and Japan.