Michael Kors Holdings Ltd (NYSE:KORS) is a lifestyle brand for “aspiring jet-setters” and a growing luxury apparel & accessories wholesale and retail company. It continues to attract customers across the globe. The company’s product portfolio is diverse, as no single segment generates more than 30% of its revenue.

Michael Kors Holdings Ltd (NYSE:KORS) has done really well lately, and its stock has appreciated more than 40% as compared to the S&P 500’s gain of 18% year-to-date. 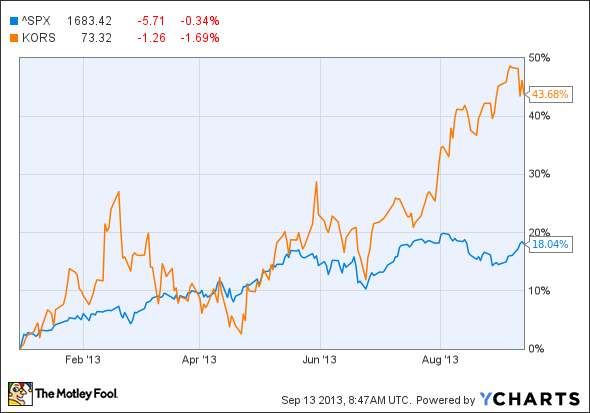 Michael Kors Holdings Ltd (NYSE:KORS) is a renowned player in the luxury apparel & accessories and footwear space, and it has done well to ride the industry trends. Its same-stores-sales improved 27% in the previous quarter, and revenue was $640.9 million. This was 54.5% more than the same quarter a year ago and it exceeded Street expectations of $572 million. Gross profit jumped 58.3% to $397.3 million and the company recorded earnings of $0.61 per share, beating consensus estimates by 24.5%.

A look at competition

China’s clothing industry is set to become the world’s second largest by 2020 and will account for approximately 30% of the global fashion market’s growth over the next five years. The Chinese apparel market is estimated to grow at a CAGR of 7% through 2016. But in China, Michael Kors Holdings Ltd (NYSE:KORS)’ rival Coach, Inc. (NYSE:COH) has a bigger presence. Kors is planning to expand in China in order to compete effectively against Coach.

Kors plans to open 100-125 stores in China in the next few years as it looks to catch Coach, Inc. (NYSE:COH), which has more than a 100 stores currently. Kors’ online strategy also seems to be paying off, as it was the most sought-after American brand in China according to the Digital Luxury Group.

On the other hand, Coach, Inc. (NYSE:COH) registered an increase of 10% in its international business in the previous quarter, with sales in China jumping 35%,  including a double-digit increase in comparable-store sales. Globally, Coach is looking to increase its retail square footage by 9% in 2013. Going forward, the company is very optimistic about its unisex Legacy lifestyle collection, men’s-only stores, and international growth opportunities as macroeconomic conditions improve.

G-III Apparel Group, Ltd. (NASDAQ:GIII) recently announced that it would be joining hands with MLB to revive the Starter Statin jacket franchise. G-III is also looking at acquisitions and mergers as a route to diversify for the future.