This series, brought to you by Yahoo! Finance, looks at which upgrades and downgrades make sense, and which ones investors should act on. Today, our headlines focus on three retail picks from investment banker Wells Fargo, which has just downgraded Coach, Inc. (NYSE:COH) and American Eagle Outfitters (NYSE:AEO). But the news isn’t all bad, so before we get to those two, let’s take a quick look at why today is…

A good day for A&F
Shares of teen clothier Abercrombie & Fitch Co. (NYSE:ANF) are flying this morning, up more than 5% in early trading. For this, you can probably thank Wells Fargo and its upgrade to “outperform.”

Noting that “trends” are now “stabilizing,” and saying it sees “significant room for EBIT margin improvement” in the U.S., paired with international opportunities for the company’s Hollister brand, Wells set a price target range of $56 to $60 on Abercrombie & Fitch Co. (NYSE:ANF) stock this morning.

Investors applauded the move, and the promise of a potential 16.5% profit from the shares themselves, in addition to Abercrombie & Fitch Co. (NYSE:ANF)’s modest 1.6% dividend yield. And call me an optimist, but I think they were right to do so.

Sure, at first glance A&F shares don’t look particularly cheap at 18 times earnings today. However, when you consider that the company generated $344 million in free cash flow last year, against just $237 million in reported “net income,” you can argue that A&F’s price-to-free cash flow ratio of 12 actually is pretty cheap relative to analyst estimates of 19% annual future growth. And when you consider further the effect of Abercrombie & Fitch Co. (NYSE:ANF)’s $580 million net cash position on enterprise value, the stock turns out to be even cheaper than that.

Clutch time for Coach?
If only we could say the same thing about the other retail stocks Wells profiled this morning. For example, thanks to a strong quarterly earnings report, Coach shares are up 16% since the beginning of April. But according to Wells Fargo, Coach, Inc. (NYSE:COH)’s run is just about done. 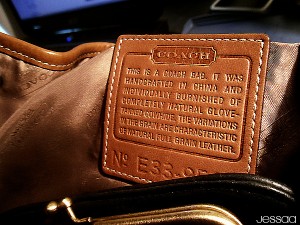 According to the ratings aggregators at StreetInsider.com, while Coach, Inc. (NYSE:COH) may be “a well-regarded brand [that] currently enjoys among the highest ROIC in retail,” the company’s experiencing “slowing comp trends in both U.S. channels,” and seeing margin pressure as it shifts from its core, high-margin products toward a diversified array of products as a “lifestyle brand.”

At less than 16 times earnings and 13% projected earnings growth, the stock’s not obviously overpriced. Indeed, once you factor in the effect of a tidy 2.1% dividend yield, the stock actually looks quite fairly priced to me. Problem is, “fairly priced” is more of an argument in favor of holding the stock, than buying more. Result: Wells’ downgrade to “market perform” looks right on the money.

American Eagle gets its wings clipped
Finally — and let’s end today’s column on a happy note — we come to Wells’ other big downgrade of the day: American Eagle Outfitters (NYSE:AEO).

The shares are taking a beating this morning (down 0.4% on an up day for the Dow) after Wells put out a note downplaying the chance of a “big share buyback” this year, as AE devotes more of its cash flow to store improvements and other capital spending. But with the caveat that much depends on just how much spending we end up talking about, I have to say I’m inclined to disagree with Wells on this one.